A walk around a creative school - the senior school

Many years ago I was part of a group of Taranaki teachers who developed activity based programmes emphasizing  quality student work, displays to motivate studies and room environments that  valued and celebrated student work.

The programmes were , to a degree, extending the developmental choice philosophy of the junior classes combined with the creative approach written about in Elwyn Richardson' In the Early World which has been recently reprinted by the NZCER.  Added emphasis also came from the UK Junior Nuffield Science Project (which emphasized open science studies) and from English junior schools that encouraged their students to do quality work and for this work to be displayed with care

The emphasis on stimulating room environments became a feature of local schools and can still be seen to this day even if the original developments have been long forgotten.

Of late , after observing classrooms shown during the lead up to the recent strike, and from what people have told me displays., I  began to think that such environments based on study topics had been replaced by an emphasis on literacy and numeracy

With these thoughts in mind I visited my nearby school ( of which I had been a principal in the 90s ) to see if I could have a walk around. The school has a creative principal so I was hoping for the best. I left totally impressed with what I saw , and with their permission, I  share some of the photographs I took.

I am sure there are many other local schools, and schools throughout NZ that follow a similar teaching approach - an approach that with the removal of National Standards will encourage teachers to be more creative and to implement the all but sidelined New Zealand Curriculum

I took so many photographs that I will write two blogs - one featuring the junior school the other the senior classes.

This blog features the senior school. The school is on two sites but it is clear that a very clear philosophy unifies all classes. 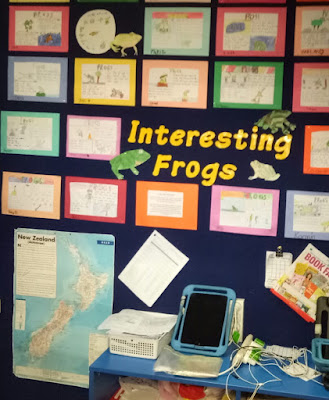