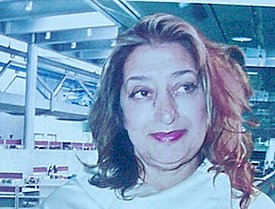 I found an article the other day about urbanism that was really interesting as it seems to be something that all growing communities have to face up to.

Having just driven through old and modern developments in Auckland the article provided some thoughts for the future. Love Titirangi - hate 'new' Howick.

In earlier days governments have encouraged the development of mass housing for low income people often without thought to the human needs of those involved. Years ago I visited an old man in the UK relocated from his ‘slum’ home to a high rise block. He had great view but in the process he had lost contact with the people he used to know and his local pub. No doubt the ‘modernistic’ planners thought it efficient!

The article I found was written by the highly respected architect Zaha Hadid, born in Baghdad and now working in London, who won the Pritzker Prize in 2004 architect’s highest award in 2004.

In her article she discuses the role of architecture in a era of rapid evolution of technology and social expectations and how this relates to urban design and to the development of our society as a whole.

How we design our cities effects how we think and live. As we shape our cities they in turn shape us. This is too important to leave to developers and local politicians with their vested interests.

The redevelopment of city centres in recent times has illustrated this need to consider human needs rather just economic efficiency. Traditional cities once evolved organically but with the advent of the motorway developments are sprawling over the country side.

Modernistic planning based on efficiency still calls the tune but Zaha writes that one of the great challenges of contemporary urbanism and architecture is the need to move away from what she calls the ‘Fordist ‘ paradigm where buildings are mass produced based on a few basic designs. You can have any house you like as long as it is a shade of brown!

Zaha calls for a ‘post modern’ or post ‘Fordist’ environment of flexible combinations of work and life processes. She uses words such as ‘dynamism’ and ‘fluidity’ in relation to future housing, careers and organizations.

All aspects of life, she writes, need to be ‘enfolded’ in on each other in a direct contest to the fragmentation and isolationism of the current ‘Fordist’ mindset.

Larger secondary schools are a perfect model of the ‘Fordist’ mentality with their standardized ‘one size fits all’ curriculums, specialist teachers, and egg crate buildings. ‘Post modern’ alternatives would see schools built in a variety of flexible ways, integrated organically with their parents and their communities. Diversity, community and creativity would be the ‘key words’ not efficiency, competition and Eurocentric standardization.

Cities, communities, and schools, would begin to reflect diversify and difference. Education, entertainment, work, and habitation would all be interrelated. The traditional modernistic grid patterns are antithetical to such developments Zaha believes.

Differentiation is the new game.

In education it will mean a move from mass education to personalized learning. New Mindsets as well as new flexible buildings will be required.

All this, Zaha says. will need a new language for architects and those who have responsibity for urban development. She believes that those cities which can shake off their now outdated designs and who dare to adapt contemporary urbanism and thinking will be the real places to live in the future.

Imagine a society, a city, or a school, built for the future rather that reflecting the past.

This dilemma will need to be faced up to in every area of life. We live in interesting times.

It is the same old story - the 'modern era' thinkers from the 20th C versus the creativity and diversity of 'post modern' ideas.