Learning to read - easy when you want to. 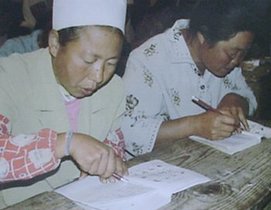 Reading has been made one of the most complicated and contested areas of teaching.

When the experts get hold of something a natural process becomes a war between apposing methods with traditional phonic approaches lined up against 'whole language' when of course both ‘methods’ are used by a reader.

In China, as reported by the UNESCO Education Today magazine (Jan 2006), a programme designed to help rural middle aged woman with minimal education to learn to read is based on a simple premise: if readers see the purpose and power of reading they will learn.

A range of purpose designed booklets with captivating drawings and easy to read text provide the woman with effective learning material. The topics of the booklets are about what they want to learn about to improve their lives Stories, produced by local authors and artists, are based about people like themselves who have used reading to help their families improve economically.

The programme is based on the ‘Educate to Empower Model’ and has been used with success by UNESCO across the world. The success of the programme causes a ripple effect that changes the lives of the woman and gives them a louder voice in their own destiny. Reading is a political act.

None of this would be new for creative teachers who base their reading programmes on the lives and concerns of their students. In the 1950s Sylvia Ashton Warner ‘invented’ a reading approach with her rural Maori children based on each child’s ‘key words’ and later the Education Department developed a set of New Zealand readers focused on the real lives and interests of students to replace the stilted imported series.

Children reading their own writing about their own felt concerns were a vital part of this process and their writing was seen as a precursor to real books. Today students’ writing about their own lives is often neglected and reading in such situations loses its connection with reality for some children. This is not helped by an obsession to improve literacy scores which all too often results in teachers making use of approaches such as phonics which divorces the process from the learners own reality.

When education loses touch with the learners own reality failure sets in for children whose life experiences are not ‘middle class’. Rather than an obsession with phonics ‘failing’ students (of all ages) need to be helped see the point and power of reading and writing so as to reclaim their own sense voice and identity.

All of this was said by Brazilian teacher Paulo Freire who wrote in the 60s that any adult can read when the words read are charged with personal and political meaning. Freire trained his teachers to move into villages and discover what words designate current important political meaning. In the evening villagers discussed the meaning of these ‘key’ words which were written on blackboards. The villagers saw the connection between words and their own reality and became empowered to take action through this realization

This dilemma captures the conflict between true education and schooling; between the current ‘standardization’ (expertly designed ‘one size fits all approach’) and the need to personalize learning to suit the needs of every learner.
Posted by Bruce Hammonds at 9:42 am

We seem to have made education too complex and comparative when instead we could be more focused and more creative.

Just listened to the 'shadow' UK Conservative Minister of Education say that when they get back into power they will insist that schools 'set' ( stream) their students and that schools will use 'synthetic phonics' in reading - and at the same time promising schools more fredom and less compliance from central government?

All I guess about capturing back the 'middle ground' of politics- little about how students actually learn.

Great blog. Learning in all areas works when the voice and identity of the learner is encouraged and respected.

Seems common sense to me - to start with the concerns and interests of the learner.

I did some action research into low achieving readers in my year three class this year, all based around their interests, diverse reading material and using this to motivate. Six children involved, all improved reading skills out of sight but more importantly now saw themselves as readers and enjoyed reading. So agree with your post!