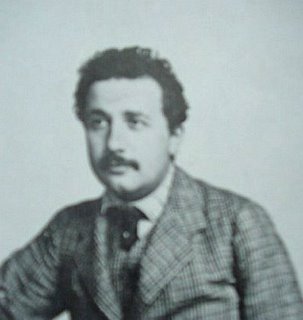 Einstein is an individual whose thinking changed the world putting paid to the fixed measured world of Newton with his theory of relativity.

It is interesting that he is another who had a shaky start in formal education. He wrote that it was a miracle that modern education had not altogether killed the magic power of a childs sense of wonder. His concern continues to this day with our system's obsessive focus on fragmented student’s achievement rather than developing a learner's curiosity, talents and, most of all, a passion for learning; all to hard to measure I guess.

Learners are curious. To be the best you have to be curious about everything and take nothing for granted. Einstein described himself as ‘neither especially clever nor especially gifted, I am only very, very curious.’

It is this curiosity, this sense of wonder, that our education system should protect above all other objectives otherwise it is only ‘schooling’ or training. Most education ends up as schooling; jumping through prescribed hoops and measuring how far you can jump.

Education has lost the big picture that so impressed Einstein. Rather than the exciting pursuit of the strange, the challenging, the interesting, it is now all about ‘evidence based teaching’ and an obsession with detail, measurement and data collection. And to make it worse data collection which excludes the very curiosity and imagination that drives true learning.

'It would be possible to descibe everything scientifically, but it would make no sense, it would be without meaning, as if you described a Beethoven symphony as a variation of wave pressure' Einstein

Education has been taken over by a ‘metric mania’ – measuring and graphing, and graphing that is made worse by the misuse of the power of the computer. ‘Data, data, everywhere and not thought to think’! Learning is about working at the edge of ones competence no matter the age of the learner.

Looking at numbers and data is not what education is all about no matter what the technocrats think. It is more a about a relationship between the learner, the teacher and some exciting content that has captured the learners imagination. Without this relationship knowledge is trivial, or inert, useful only to prove you have achieved some prescribed level or other. Learning isn’t above incremental change, achieved in isolated subjects, it is about individual leaps of the imaginations new ideas are comprehended.

And what count the cost of all the time wasted in compiling these irrelevant reports of bland achievement? How many students leave our system with their learning per intact is more to the point?

Learning is a search to make meaning – about seeing connections and being curious about the mysteries that life throws in our way. It is not about consuming little bits and pieces without being aware of the big picture.

Learning is about finding about things that we don’t know; about things that are meaningful to us. Once we are aware of a problem then we need to do the thinking and the research and to express what it is we have found in whatever way is appropriate.

How this can be planned and assessed by distant experts without losing the spirit of learning is beyond me.

We should instead focus on what inspired Einstein.
Posted by Bruce Hammonds at 11:35 pm

I wish more teachers would simply open their eyes and take a look around, learn about the very natural process of learning and move away from classroom rituals that limit so many opportunities for learning. It seems to me that many teachers create little worlds of sensory deprivation that they force their students to inhabit with them.

What you say about Eintein, the power of curiosity, imagination, and the need for a sense of wonder in the learning process, is very pertinant.

'The world is so full
of a number of things,
I'm sure we should all
be happy as kings.'

I really lke your RLS quote - I shall add it to my collection. Thanks. And I also like your phrase, 'teachers create little worlds of sensory deprivation that they force ther students to inhabit with them'. This is more so as students get older.