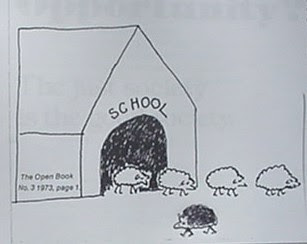 Schools for conformity or creativity?
I can't resist sharing some ideas about school change by David Chapman ( Massey University College of Education) I read recently.
David sets out to explain that schooling is more political than educational, particularly over the past 20 years.
'Every government has attempted to massage the education system to align with their political agenda', he writes. Just recently,for example, we have seen the Leader of the Opposition bring out national testing in literacy and numeracy - an idea that has voter 'clout' but disastrous educational consequences.
Chapman gives a brief history of recent educational reform that few of todays teachers will be aware of. In 1984 Merv Wellington ( National) published a review of the core curriculum - a 'back to basics' move. Then the following Labour Government , after a wide ranging consultation process ( which was a brilliant piece of democracy) , published an Education Review (87) resulting in a draft curriculum. All this was thrown out, ironically, by David Lange leading a 'new' Labour Government obsessed with a 'marked forces' agenda. This led to the abolition of Education Boards and to the establishment of 'self managing schools' governed by locally elected Board of Trustees. As a consequence of this move there is now little co-ordination between schools and a lack of focus on teaching and learning.
Along comes Lockwood Smith ( National) with a new very rational curriculum agenda ( learning areas, strands, levels and countless learning objectives) which asked teachers to check that all students had covered all the defined learning objectives. And to add to this Lockwood introduced a new secondary qualification system ( we now kn0w as the NCEA). Both resulted in impossible assessment tasks for teachers.
A returning Labour Government modified expectations and in 1999 introduced a 'curriculum stockake' ( along with other countries who had found that they also had asked far too much of their teachers). The 'stockake' has resulted in the current 'new' draft curriculum. And in the future National promises a return to testing basics while the current government is talking about educating for the 'knowledge society' and the need to 'personalise' learning.
And what, Chapman asks, has all this change given us? Very Little, he replies referring to international comparisons.
This is not rocket science he suggest as 'new' curriculums still have to be taught by the same teachers! And he criticizes the 'top down' professional development as being inadequate.
One of his conclusions , referring to our long poor 'achievement tail', is that this stems from socio economic issues resulting from the ideological market forces political changes of the 1980s ( introduced by Labour but continued with enthusiasm by National). These ideological changes ( to develop a lean , mean , competitive New Zealand ) have exaggerated social differences.
If we want to improve educational performance we need to address these social problems and not simplistically blame the schools for students who are failing.
But, he also concludes, that if we want to improve students success we need to focus on teacher quality and teaching and learning.
I would think that if we had focused on recognising, and sharing, the ideas of creative teachers and innovative schools in the first place, and if the various governments had seen their role as creating the conditions and providing resources, we would be in a far better position than we are in now.
And, as well, we would have teachers who have faith in their ability to develop new approaches to teaching and learning without distorting and disabling the total system.
The politicians have had their day -time to put the trust back to those who have the practical experience to develop new ideas school by school, community by community.
As for John Keys he may have his chance to introduce his basic testing but time will prove him wrong as well.
Posted by Bruce Hammonds at 10:54 am

Hi Bruce,
David Warlick suggested leaving a CyberCompliment to any blogs we read and admire today ... so ... you are top of my list! Thanks for all the great blogs that make me reflect on the how and why in my classroom.
Jody

I like the idea of getting a cyber compliment Jody! Who is David Warlick? No matter, he gives good advice!

Here is the url for one of his blogs http://davidwarlick.com/2cents/
David Warlick is a great person who loves conversations and reflects on many of the issues presented in our assessment mad world today.
He also created the 'classblogmeister' that Tom and I use with our classes to blog - for free!
Go on, go to his blog and read a bit. I think you'll enjoy it!
Jody

Thanks Jody - will do. Have a great break.