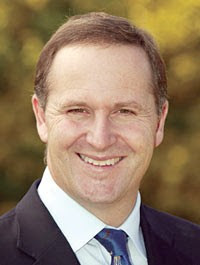 Superficial accounting?
The Leader of the Opposition Mr Keys presents a friendly appearance but lets not forget he is a politician striving to gain the ultimate power in next years elections.
His recent speeches have outlined his ideas about the need for primary schools to introduce national testing in literacy and numeracy. Nothing new in this, he is simply dusting off one of his parties ideas from the past.
On the surface it sounds appealing. Shouldn't all students be measured regularly to see how well they are doing in literacy and numeracy? And ought not parents be able to see the results and how well their children ( and school) stacks up against others? Lots of votes in this - along with tougher ideas on crime and the welfare state. After all didn't John Keys successfully make from state house environment - and if he could , well why can't all the others?
Even the radio and TV commentators fall in line with Mr Key's thoughts - mind you they are not known for their in-depth thinking on the issue.
Before we all rush in to sort out teachers it would be advisable to think about some of the consequences of such simplistic targets. As it is said, it is not the targets you hit that count - it's the one you miss because you weren't looking!
In the UK students are tested and schools results are published in what are called 'league tables' creating a winners and losers situation. In the US the President as introduced his 'No Child Left Behind ' Bill which is proving proving equally counterproductive. In the UK, after showing improvement, because of the pressure and imposed approaches, scores are now levelling off. In the USA endless so called 'research led' programmes have been introduced with varying success - most involving dull worksheets featuring phonics. In both countries the price paid is less emphasis on the creative arts, cultural studies, environmental and social issues, and developing students' talents. Busy teachers, who jobs are at stake, will simply focus on what is being tested narrowing the curriculum in the process. This is what has happened in the UK and the US.
As a result, in an age that require more and more initiative, spontaneity, creativity and teamwork, both teachers and students simply do not have the time to concern themselves with such vital issues.
So as we reach toward to what some are calling the 'second renaissance', or 'a new age of creativity', Mr Keys is looking back to a Victorian 'three Rs' vision. Not that literacy and numeracy are not important.Far from it, but they must be seen as 'foundation skills' that must be in place so a more relevant inspirational curriculum can be taken advantage of.
And if anyone had take the time to visit a primary school, they would see that these basic skills already take up most of the school day - as one UK commentator has said , 'the evil twins of literacy and numeracy nave gobbled up the rest of the curriculum.'
A focus on literacy and numeracy, and the associated testing regimes, will inadvertently cause schools to provide an impoverished curriculum that will effect the poorest children of all - where most of the so called 'achievement tail' resides - a 'tail' created by issues beyond the schools reach.
There are better answers out there but they mightn't appeal to middle class voters - which is what the next election will be all about. It is all about winning not education.
What we want is intellectual courage and vision from our leaders as we enter a 21st century - a century that will depend on the creativity of all its citizens.
The answers do not lie back in the past, but this is where Mr Keys is looking it seems.
We deserve better.
Posted by Bruce Hammonds at 2:00 pm

Wouldn't it be great if we could put political bias to one side and have a national 'conversation' about the direction 'we' want NZ to go and then to map out possible 21st century scenarios for the various institutions and organisations, incuding education. This could be done using articles in papers, TV and radio - even using interactive use of the internet. We could then vote for the party that provides the best pathway to the future - or an alliance of parties. Until then we will have to put up with political point scoring, or scaring; usually based on misinformation or who has the loudest voice.

Before the last election I heard Bill English talk about the huge amount of taxpayer money that was being poured into ICT in education. He said that he'd visited a lot of schools and he couldn't find any evidence that it was making any difference. Maybe this is the money the National party have earmarked for student testing!