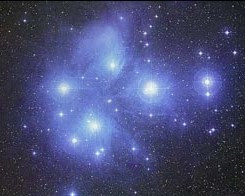 Known to different ancient cultures around the world by a variety of names the Maori called this star cluster Matariki - for them it marked the beginning of the New Year.

I would hope as I visit classrooms in the next few weeks I would see evidence of an awareness of Matariki - or the Maori New Year. Obviously it ties in with the shortest day - or the middle of Winter.

I wouldn't expect a major study ( but I cant see why it could not be one) but some recognition of the event would surely indicate that the school was taking Maori culture seriously. Matariki is one of the most significant celebrations in the Maori calendar and is becoming more well known in recent years. All New Zealand students should have some understanding of its significance, and not only to the Maori as their research will tell.

What a great way to search the Internet to research what it means.

A small wall display with a suitable heading, a few key questions and some student research, would be all that is needed.

Recognition of such events that will contribute to the development and appreciation of a diverse but inclusive New Zealand culture. Classes that take advantage of such 'teachable moments' are helping students develop a consciousness of 'our' distinctive unique culture. It will help them see 'us' as special in an increasingly global world.

It is such 'signs' of our distinctive culture that I look for when I visit rooms - it shows me that there is a teacher that cares about such things.

There is such a lot of good material to refer on the web.

The rest is over to teachers' imagination

Matariki - the New Beginning
Posted by Bruce Hammonds at 3:35 pm

I saw the beginning of a great Matariki mural at Puketaha School this week. Great stuff