A critical view of the NZ Curriculum by Kelvin Smythe. 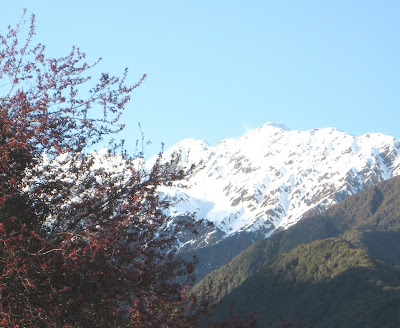 Recently I was asked to present at the Westcoast Principals Conference held at Franz Joseph. It was a conference with inspiring ideas to match the scenery. Kelvin Smythe is a long time supporter of New Zealand teachers and believes that they need to hold true to their hard earned beliefs.Kelvin's view of the new curriculum is worth a read. To read his full talk visit his site but the below is my interpretation of his views - views I am happy to align myself with.

Kelvin titled his talk 'Colonising the Curriculum' and his presentation provides valuable insight into both positive and negative aspects.

As for the Vision he says 'enough already', And for the Learning Areas, Values and Competencies he says, 'yes they pass my test'.

His overall view of the curriculum is that if everything else had been even, it could have been a useful document.

But everything isn't even. Curricula, he says, doesn't matter much it's the context that matters. While teachers may be buoyed up by the curriculum Anne Tolley has little regard for the curriculum. She is busy pursuing what will be the real curriculum: national standards, standardized tests; collecting data for school reports; and a narrow view of literacy and numeracy.

Welcome to your new world!

Teachers will have to keep the true spirit of education alive and to do this they will have to 'colonise' the new curriculum.

If learning is going to mean something to children is has to cater for the affective side of learning as well as the current cognitive bias. Both work together. When children change the way they see and respond to the world it is a transformational experience. As a result children get a 'feeling for', or a positive attitude towards, whatever is being learnt. This 'feeling for' is not measured by those who rely on quantitative measurement but it is vitally important, particularly if we want learners to love whatever they are learning.

Valuing students feelings attitudes as well as the cognitive is the holistic or learner centred approach to teaching that Kelvin believes is the core of good primary teaching.

It is this creative integrated approach that Kelvin want teachers to protect from the those who want to reduce learning to what the politicians have selected to be measured. When teachers become fearful of hierarchical pressures they tend to look past the needs of their children to focus on complying to the imposed requirements of others.

Kelvin is very critical of some of the conformist 'best practices' being imposed on schools by academics and literacy and numeracy contracts. He worries about the post modernist view of knowledge that says content doesn't really matter it understanding the inquiry process that counts. Correctly, he says, that without real knowledge students are not able to develop the love of learning that comes from such knowledge.

Back to the curriculum Kelvin is supportive of the advice to 'cover less but cover in greater depth (p34), that the the curriculum 'allows teachers the scope to make interpretations in response to particular needs, interests,and talents of individuals and groups of children in their classes' ( p37) and that the 'curriculum is ...a framework rather than a detailed plan....And that schools have considerable flexibility when determining the detail'(p37).

Kelvin is also very supportive of learning area statements and the advice that 'these statements, rather than learning objectives , should be the starting point for developing programmes of learning...schools are then able to set achievements objectives to fit these programmes'. (p38)

As for the strands being covered on the basis of a yearly rotation policy Kelvin just says 'Yeah right!'

A real concern, for Kelvin, is the assessment statement that says that learning objectives 'should be stated in ways that help teachers, students, and parents to recognise, measure, discuss , and chart progress.' Kelvin sees these as 'chilling words' and if followed will result in 'the withering in schools of imagination, creativity, intuition, the divergent, the aesthetic, the immanent, and the affective.'( p39)

'We have in this one statement', he writes, ' the enemy of our holistic education tradition made clear. We have the triumph of the technicists, the atomists, the bureaucrats, the contemporary Gradgrinds, the measurers, the controllers'.

There is though, on page 39, a statement about assessment Kelvin believes is of considerable elegance but, he believes, the damage has been wrought - and this without considering the damage to be done by national standards. The following elegant statement should feature in school documents , 'the primary purpose of assessment is to improve students learning and teaching.' And, even better, the statement continues, 'much of the analysis and interpretation often takes place in the mind of the teacher.'


Is there a conflict with the earlier statement? This contradiction, Kelvin writes, is the fundamental flaw in the curriculum.

Kelvin is also critical of the nonsensical way the learning objectives are expressed in the 'pull out' sections and writes that why could not the level four statement encompass all levels. I totally agree. While many teachers 'feel' that the learning objectives have less influence it must be noted that the proposed national standards are to be defined by achievement objectives for particular levels.

Kelvin is really enthusiastic about the Arts Learning Area statement but feels there is no need for a separate technology statement before level four. Not that much is being done - or science for that matter!

As for the competencies Kevin believes that they should be integrated into the everyday functioning of student learning. To do this seamlessly would be a mark of success. A simple phrase to represent each competency would help teachers nad studnts keep them in mind.

Kelvin sees the holistic ( Creative) approach as an alternative to WALTS etc.

Kelvin is, at all times, aware of the need to protect time for creative education and also in giving space for children to be divergent rather than focusing on the 'right answer'. In this Kelvin believes (and I am right with him) that the creative approach is preferable to the WALTS now in vogue - combined with such thing as predetermined 'success criteria', 'teaching intentions' and feedback. All of which , if not used wisely, can result in conformist teaching and learning. In a holistic approach the teacher does not discuss in detail with the children what they are to learn, then after the lesson discuss with them what they did learn ( making the process venerable to parroting). By not defining the objectives before the activity plenty of time is left for the children to be divergent, intuitive and imaginative, and for the teacher to learn alongside the child.
At the very least teachers can broaden the WALTS to allow for, or encourage, divergent thinking.

looking at the current emphasis on an inquiry approach.

The curriculum, on page 35, has given emphasis to an inquiry approach but all too often this has been interpreted as students gathering information and 'cutting and pasting', courtesy of google. This is a shallow version of inquiry. Real inquiry needs to be based on real problems, first hand or experimental activities. By such inquiries students challenge their 'prior ideas' and come up with the best conclusions they can - conclusions that are always open to further questioning. Kelvin believes such 'hands on' investigations are rare in schools. I have to agree - there is simply not time to do so. Good inquiries (and associated expressive work) ought to be the driving force for much of the school day.

Teaching, in Kelvin's view (and I might add mine as well) is as follows:

'Look -I'll get straight to the point.Teaching, in my view, is about providing an environment that increases the likelihood of children being involved in powerful transformative experiences; by definition that means that the affective must be central part of the process. The affective, however, only occurs with genuine effect, I argue, when it is grounded on detail, information, and reality - so I am talking airily effective teaching.'

Kelvin asks if people remember the 'feelings for' approach he developed in socail studies? It was, he writes, about developing in children a 'feeling for' other cultures based on real detail,information and reality. Such teaching in science as well, was once feature of creative classrooms. And the results showed the idiosyncratic ideas of the students involved as they expanded their knowledge.

Kelvin is making a strong plea for teachers to value children's emotions, attitudes and feelings and for valuing the diverse expressive abilities of all children. This approach is in contrast to the formulaic 'best practices' classroom that are all too often seen today.

Kelvin recommends that the learning structure should include: Introduction, Developing understanding,Expressing understanding and Conclusion. The key stage, he writes, is developing understanding - this is the area children should say on until a strong affective response is evident. In social studies look for a 'feeling for' the people in the human situation under scrutiny and in science where children express a compelling curiosity to want to push on, in mathematics a keenness to apply idea gained from their learning.

Kevin comments that 'science and social studies are in serious trouble in our school ( this is reported on in recent NEMP findings) because there is simply not enough time for the emotions to be engaged, their curiosity aroused, and divergent imaginative thinking to emerge'.

I am with Kelvin.

Teachers need to fight to return creativity as central to all learning.
Posted by Bruce Hammonds at 11:45 am

Thank you Bruce for sharing Kelvin's ideas with us. He makes real sense. We need people like your and Kelvin to keep us focused on what is really important.

That bit about Mrs Tolley's curriculum is scary but all too true. We have a fight on our hands -are we up to it I wonder? Welcome back to her world - the Victorian Age!