'Don't be a chameleon on the plaid'! 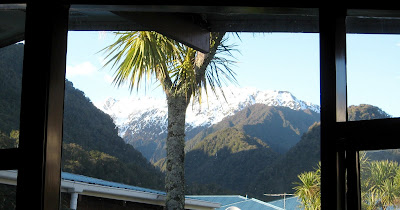 View from conference room looking towards Mt Cook /Maunga Aoraki. Aoraki in Maori means the 'cloud piercer' -an attribute all creative principals need to see through all the compliance nonsense and curriculum confusion that gets in the way of leadership. Kelvin Smythe opening the conference on a very philosophical note; it was my role to close the conference.

Kelvin's main message was about the morality of being a principal - that principals need to be in charge of their own destiny. That advice needs to be contestable and that Principal need to focus on the important things -as for the rest just get them done.

Principals, he said, need to take a moral stance. Research shows that NZ Principals now work 50% harder than ever but that most of this time is not spend focusing on teaching and learning. The moral decision is to focus on teaching and learning and the best advice, Kelvin believes, is to 'colonise' the New Zealand Curriculum document and to keep integrity with their own beliefs. Curriculum, he said, doesn't really matter -all too often it gets in the way as past decades have shown. If principals cannot keep true to their beliefs they will become as confused as a 'chameleon on a Scottish plaid!'

The new curriculum, he said, gives plenty of latitude for principals to manoeuvre and 'colonise' the official curricula - indeed all official polices - for the benefit of the children. 'Any curriculum needs to be transformed by teachers to make it work for them.'

Kelvin worries that curriculum screws are being tightened by the review office and the research of quantitative academics by their imposition of so called 'best practices' leading to a sameness in schools and classrooms. I couldn't agree more.

The moral position is to act on what one thinks is right for teachers and students although, Kelvin admitted, few principals would stand on a moral position come hell or high water! 'Standing out from the plaid', though he said, ' can be refreshing and a relief.'

Kelvin made a strong stand for the inclusion of the affective, the aesthetic, the symbolic and the intuitive, as being the heart of successful classrooms. It is these areas that are currently missing or being pushed to the periphery. Kelvin argues for the holistic duality of the affective and the cognitive. He wants to see a renaissance of the arts in our classrooms so students can gain transformational growth by expressing themselves through the arts. So students can gain 'feeling for', or a positive attitude towards all areas of learning. I wonder how many schools are including such things in their educational 'targets' - and such creative learning will be put at even greater risk by the reactionary imposition of national standards!

Kelvin made a plea for primary teachers to stick to their beliefs about holistic education and to resist impositions that get in the way of the teacher learner relationship; that we need to see that the affective side ( the 'feeling for' something) is not neglected by centralised standardized 'evidenced based' approaches. All learning, he said, relies on a powerful meaningful contexts to be sensible to the learners. The best evidence we share should come from our own classroom practice, informed by other sources, and that we must avoid being in the thrall of qualitative academics ( John Hattie). Such academics, he said, are 'the witch doctors of contemporary life'.

Another aspect of moral leadership is the guidance you give and this should be informed by exceptional teachers. Exceptional teachers need to be protected from conformist influences. Such teachers have the ability, he said, to recognise in a flash the ideas you proffer that provide them integrating insight. Such teachers make such ideas their own and move on.

When you find such teachers cherish them - it is the easiest way to maximize the good you do.

Kelvin made the point that while learning is complex teaching should not be. Students questions provide intrinsic ideas to explore with the students. Teachers need to be hugely sensitive of children's responses. Teaching ought not to be the peak of theory; it is something straightforward and naturalistic.

Everything a principal does has moral implications - you need to shield your teachers from the worst of current directions. It is a contradiction that while the new curriculum is freeing things up other policies are screwing things down. You have to walk the line between latitude and control.

This paradox asks you to 'stand out from the plaid' if you do not want the false premise of national standards, the obsession with literacy and numeracy, the neglect of the arts to call the tune.

Kevin's main message is that the price of silence for not acting decisively and morally is that politicians and the educational bureaucracies will conduct conversation with themselves, interpreting your silence as acceptance.

This is why, he said, you must not only 'colonise' official policies but morally you must make your voices heard.
Posted by Bruce Hammonds at 10:40 am

So true! I have found a great book called 'How to be an explorer of the world' ... so fun ... think I'll make it my new class curriculum!

Great to hear from you Jody. To be a confident explorer - that is what it is all about. Have a great break

Thank God for people like you and Kelvin - you both stick true to your beliefs. And It is great to see someone writing about the importance of the affective - it is important that students gain a 'feeling for' whatever they are exposed to. Without acknowledging the affective it is no wonder so many studnts are 'turned off' learning.