A powerful study for your students? 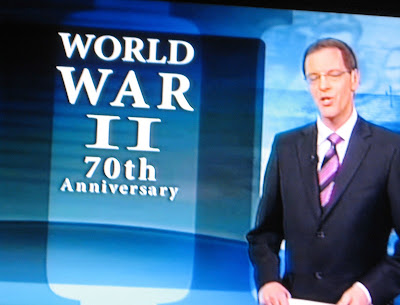 Newsreader on TV introducing items about the 7O th Anniversary of World War Two. An aware teacher surely would've take the opportunity to introduce the importance of World War Two to their students? At least for students in year 5 and above. In many classes it would build on the ideas they may have gained from earlier ANZAC studies?

It would be interesting to gather from your students what they already know about World War Two. If this 'prior knowledge' were recorded in same way it could be used later to show students how much they have learnt.

What are their 'first questions' and the current answers. Use these question to direct student reading and search for information.

Why was it called World War Two? Was there a World War One?
who was fighting who?
Why was New Zealand involved?
How did it start?
Where was it fought?
Who won?
Was it a necessary war? Why?

It would be interesting to gather students' views on war? Such a study would introduce the ideas of sacrifices involved by soldiers and citizens alike.

Who knows where such study would lead. Even if it were just studied as language unit for a few day it would provide food for thought for students. At the completion students could reflect on what they have learnt as well as their own thoughts about wars. If a more extended study students could research various topics in study teams.

As they uncover resources ideas will flow. Many students will have grandparents who can share what they remember from their fathers who may have served in the war.
Posted by Bruce Hammonds at 11:25 am

Did you see 'Glorious Basterds' yet? It was fiction but the characters in it weren't. I was troubled that young adults wouldn't know the truth. Would it matter if students knew that Hitler was burned to ashes by a young, Jewish heroine or truly died by poisoning himself in a bunker? I think it does - but I'm not sure if other people agree with me.

I know for a fact now, there are people who believe that history is remoldable and believe there are different truths for different sorts of people.

No I didn't but if it was seen by students then the point of their research would be to get to the truth as best they can. They aslo must see that history can be interpreted differently depending on who tells the story.

I want to disagree with you for argument - if a person is satisfied with a 'truth' - even if it is mostly a lie, albeit because the outcome remains the same, then one truth is more concerned with how the present gets shaped and less reflective of the past. We are then left with only trusting upon fate that cannot be rationalized -"I wold not be in a folis paradyce." Our society does not question truth or its source and that is a very naive way of living.