The danger of National's Standards! 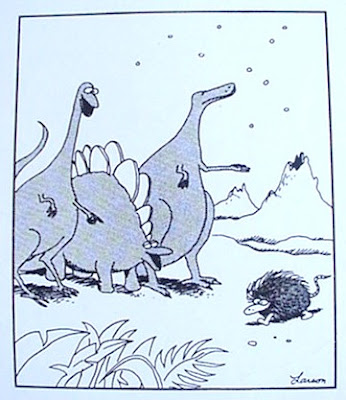 One Dinosaur has noticed things are a- changing - for the worse -  for them!

As the weeks go by, and as the pressure to implement the “national standards” (better phrased as ‘National’s standards”) is increased, I’ve been noting, with growing concern, what seems to be an increasingly tacit acceptance of the situation. I guess there are three possible reasons for this development.

One of these is that many principals, even though very well informed, and anti-standards, have come under pressure to implement them, either from their BOTs or a result of the MOE bullying. Principals, teachers and BOTs giving way to MOE pressure is understandable, if regrettable. It can be very lonely out there.

Another possibility is that there are significant numbers of educators out there in schools who don’t really understand the full implication of the imposition of standards, nor of the agenda that is driving this. Why?

The most concerning aspect is that some of our colleagues are actively buying into standards based education as the best way forward, although what they are moving forward to is a moot point. Again, why?

Unity is our best defence. Let’s imagine a situation where every primary school in New Zealand, fully supported by their Boards of Trustees and wider community, refused to have anything to do with the standards, regardless of any pressures from the government and their puppets in the MOE.

What would happen? Nothing. The power remains with the people. Or, to phrase this another way, as Benjamin Franklin said when he signed the US Declaration of Independence "We must all hang together, gentlemen, else, we shall most assuredly hang separately". Unfortunately we don’t have this unity, and so it appears that we’re slowly being hanged separately.

Communities (especially parents) need to be well informed about the whole curriculum, and about what and how children are doing . The National government cleverly targeted their lack of knowledge by raising fears that their children were failing - hence the very inaccurate '1 in 5 children are failing.' How about, to use the same dubious data, saying that 4 out of 5 are doing very well?

Informing our communities about all our successes is vital, to show that NZ schools are indeed leading the world in providing a full education, rather than the narrow '3Rs' focus of the government. It's my experience that parents really want their children to have a full breadth of educational opportunities. Competence in the 'basics' which is another variation of the '3Rs' that was current a couple of decades ago, provides the key skills for the rest of the learning to occur. That's not rocket science, and I’ve found that parents are very receptive to this explanation.

The case against national standards in the New Zealand context has been very well made by many authoritative voices and doesn’t need repeating by me. Any reader of this blog, and Kelvin Smythe’s Networkonnet, should be very well aware of the issues about standards. Anyone who hasn’t got the message by now isn’t going to be changed by further argument.

Further to this, the case against any standards based assessment/testing regime, as used in a number of overseas countries, is also extremely well made. The arguments are so comprehensive that really there is no debate that this is a disastrous development in education,nationally and internationally.

Given this, I really wonder why it is that there appears to be significant numbers of principals who don’t seem to be aware of this, or, even more puzzling, why there are principals who are actively promoting standards in their schools. Or is the answer that many people see only the surface level problems with the standards, and believe that they can work their way around them? I don’t know. People who play with fire are in danger of getting burnt.

Why are the warnings of people like Bruce Hammonds, Kelvin Smythe, Lester Flockton, Warwick Elley, Ivan Snook, John O’Neill et al, as well as the NZPF, NZEI, and of very experienced principals such as Geoff Lovegrove, being ignored or downplayed?

Why are these voices of experience not resonating in the educational community? A recent comment on one of Bruce’s blogs said; “it seems we have commentators who have long since left working in schools feeling they can also have a go at us as well”. Without doubt, a sizeable proportion of the most vociferous anti-standard campaigners are ‘well seasoned’, either at or approaching the end of their active careers in education. Is this why their voices are discounted? Does this blog comment imply that only those still in principalship or working in schools have a voice?

Reviewing the educational scene, we know that the current system, with its underlying ideology, has now been in place for 21 years. We can therefore postulate that a large group of today’s teachers (including quite a number of principals) have worked most, if not all, of their teaching careers in this system. Institutional memories of the pre “Tomorrow’s Schools” era are growing dim.

Let’s not forget that the period 1992 - 2002 or thereabouts was dominated by the requirement to assess all 1220+ achievement objectives set out in the curriculum documents of the time, and that the chief villain was, typically, ERO’s demand to see this documented. There was little scope for creativity, innovation and so on, in this framework - the formative teaching years of the group of teachers and principals we are discussing.

It wasn’t until the introduction of the New Zealand Curriculum that this strait jacket was officially removed, and schools and teachers were given the freedom to develop creative and innovative educational programmes in their schools. It’s not surprising that this was very new territory for many, although for us ‘grey hairs’ it was a refreshing chance to revisit the best of the past in a 21st century context.

Here we are, a mere few years later, and the strait jacket is returning in a modified form - same agenda, different method. It’s not altogether surprising that many principals and teachers may be confused and unsure.

It is apparent now, that there is little to be gained by providing more anti-standards information. Anyone who hasn’t got the message that there are serious concerns about standards must be living in a different space-time continuum, and so we need to reflect on why the warnings are being ignored or set aside.

Do New Zealand principals and teachers really understand what is happening? Or is there a degree of hiding their heads in the sand and hope the danger goes away (the so-called ostrich approach)? Or do people truly not know? Does this explain the tacit acceptance of the national standards?

The present government’s agenda is obvious. If we don’t fight now, when do we fight? When league tables are published, rating schools by test results? Or do we wait for the inevitable statement that since principals and teachers can’t be trusted to provide accurate national standards data, it will be necessary to implement a national testing regime? Or do we wait a bit longer, for an attack on the NZEI and the development of principal and teacher performance pay based on test results?

Think this won’t happen? Are you prepared to take the chance?

'Necessity makes even the timid brave'  Sallust Roman Historian
Posted by Bruce Hammonds at 10:52 am

How they can ignore the implications is hard to understand - I guess principals are naturally compliant to authority?

Enjoy what I see so far...I'm going to link you on my art blog.
-Ted Edinger

I had a brief discussion in the pub last week with some present day principals (in contrast to retired principlas or, what Allan calls ,'well seasoned') and they didn't seem too concerned about National Standards. My feeling is that testing and data collecting has become a normal part of their management style and that the Standards are just more of the same. A bit of a nuisance but not serious - although one principal , on the side, told me that teachers have never had so much interference in their teaching.

Makes me think principals are part of the problem?

Pressure on Principals has never been greater, our schools are data driven and anyone who says they are not are lying. ACCOUNTABILITY = NO JOY LEFT IN TEACHING! Our Principal colleagues are prepared to sell their souls to the devil in order to ' look good" and it is SO easy to say that the Principal's opposing NS are unprofessional. Educator's who are promoting this nonsense are a disgrace. NS are morally and ethically wrong for our country. Educators who are not informed, who do not read, who do not unpack research are a disgrace. It is a sad day that we focus on the Alaisdair what's his face and one un PC comment, the Nation storms over a tea leaf. Yet a dictatorial Government, a MOE that has become the sector enemy, a policy that WILL destroy our future kids, sails through untroubled waters. NZ is in a very dark place and the clouds are looming bleaker... What will it take to wake the sector up?

One day they will all wake up and wonder what happened and ask themselves why didn't they act when they could?