Schools being taken down the wrong track -and many to busy to notice? 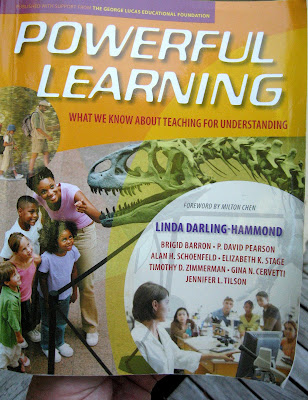 This is a book all schools should have on their professional reading shelf. Professor Linda Darling Hammond is a internationally renowned leader in educational reform and former adviser to Barack Obama's presidential campaign. Unfortunately her ideas have not had any influence at 'our' Ministry of Education . Our technocrats seem determined to follow shadowy advisers of their own choosing - ones that fit the  populist accountability ideology of the current government. Mind you the Ministry equally ignores the ideas of Sir Ken Robinson, Guy Claxton, Howard Gardner, David Perkins, Andy Hargreaves,  Professor Yong Zhan and the success of such countries as Finland.  And, of course the expertise of  such New Zealanders as  Lester Flockton, Terry Crooks, Havid Hood, Kelvin Smythe and Elwyn Richardson

And still  most schools meekly comply. Schools would be advised to remember Michael Fullan's words  that 'politicians are aways wrong' and get together for mutual support to put up real opposition before it is too late.

So read Linda Darling-Hammond's address and decide to work with others to fight the good fight against the bland Ministry technocrats who are controlling our destiny.

Back to extracts from Linda Darling-Hammond speech given when she was awarded Columbia University's distinguished service medal.

She began her talk by reflecting on a teacher who helped one of her daughters who previously had had a difficult time at school.  Her daughter's new teacher, 'created a wonderful stimulating wonderland of opportunity for learning: children experimenting and investigating...designing and conducting projects, writing and publishing their own little stories'.

'Then ,as now, the creation of truly professional educators was a subversive business. As scientific managers were looking to make schools "efficient" in the early twentieth century - to manage schools with..more extensive testing, rules and regulations.'  A book written in this era asked  for ' unquestioned behaviour by teachers.'

'To implement this scientific approach obedience was prized. One  speaker in 1914 observed " there were so many efficiency engineers running through school houses ...that grade teachers can hardly turn around in their rooms without butting into two or three of them".'

'Does this sound familiar?'

'In the view of these brilliant managerial engineers, professionally trained teachers were considered troublesome, because they had their own ideas about education and frequently didn't go along with the plan.'

'As one such teacher wrote in..in 1914: " We have yielded to the arrogance of the business men and have accepted their criteria of efficiency..without question.We have consented to measure the results of educational effort...in the terms that prevail in the factory...But education is not analogous to to a standardized manufacturing process.Education must measure its efficiency...in terms of increased humanism, increased power to do, increased capacity to appreciate."'

'Sounds suspiciously like John Dewey and Maxine Greene, doesn't it?'

While the scientific managers foolishness was creating a strangle hold on schools...schools leaders and professors were creating progressive schools in which students engaged in intellectual inquiry, hands on projects and activity based curriculum - guided by an understanding of child development, the new sciences of learning and emerging practices of pedagogy. These schools practiced democracy in action and provided a counterpoint to the factory  model schooling that Dewey called " mechanical, dull, uninteresting, and hardly educative in any meaningful sense" '.

Linda Darling-Hammond then moved her emphasis to the present and challenged current teachers , ' to plant the ideals of democratic, progressive education as leaders in schools...all around the world...making decisions on what is best for for students...by mastery of a common body of knowledge and skills - and a commitment to always seek more and better knowledge to meet students needs..and a commitment  to define, transmit and enforce standards of practice - a community that pledges to work together to do the right thing.'

'This commitment is more important than ever before.We live in nation that is forgetting its children' ( she goes on to talk of the poverty gap that effects student's achievement in the United States).

And in reference to international comparative  test scores she says the  United States ignores that 'the top performing nations rely on school based assessments of learning that includes challenging projects, investigations and perfrmances'.

'Meanwhile , the profession of teaching and our system of public education are under siege from another wave of scientific managers, who have forgotten that education is about opening minds to inquiry and imagination....that teaching is about enabling children to make sense of their experience, to use knowledge for their own ends, and to learn to learn, rather than spend their childhoods...feedin the voracious data banks that govern ever more decisions from the bowels of the bureaucracy.'

Such scientific management she says provides mandates that, 'would "choke a horse"'  and 'threaten to replace the opportunities for teachable moments that expert teachers know how to create with their studnts'.

'These new scientific managers...like to rank and sort students, teachers, and our schools - rewarding those at the top and punishing those at the bottom, something high achieving countries don't do but often forbid'.

'And the new scientific managers cleverly construct systems that solve the problems of the poor by blaming the teachers and and schools that seek to serve them, calling the deepening levels of severe poverty an  " excuse" ...this is the equivalent of deciding that if the banks are failing, we should fire the tellers. ( And whatever you do, pay no attention to the man behind the curtain)'.

'But public education has secret weapon - a Trojan Horse, if you will: the members of the teaching profession..who have mastered a strong body of professional knowledge, who hold a strong ethic of of care and who are determined to transmit this knowledge and commitment to others throughout the education systm'.

And reference to teachers who lead the fight to a more equitable system ,'they are leading the efforts to create a more thoughtful and creative curriculum and instructional strategies, and who are developing more effective teacher and leadership education and professional development.'

Such people , 'will create more exciting and empowering schools for children; more useful  and assessment of learning; and more just and humane policies to guide a system focused on learning, not selecting and sorting, rewarding and punishing.' This will  be achieved, 'in the strong professional communities you have created...you will carry on building a profession that serves democratic education - one that provides for all children what the best and wisest parent wants for his or her child, as John Dewey put it.'

Lina Darling -Hammond concludes, ' doing the right thing is not easy - meeting your professional commitment is not easy.

Whether it is standing for a child who is mistreated, or finding the energy to go the extra mile to reach out to a troubled parent, or taking up a challenging issue in the research, or taking on a difficult concern in the public discourse, doing the right thing is often hard.

'Take heart in knowing that the arc of history is long, as King noted, but it bends towards justice.Take courage in knowing where a community of hands comes together to work towards justice, a freedom will grow. And take pride in knowing, when the work is challenging and setbacks come - as they must when anything important is happening - that you are building a better future for every child and family and community you touch.'

'And remember, as Robert Kennedy, observed':

"It is from numberless diverse acts of courage and belief that human history is shaped.Each time a person stands up for an ideal, or acts to improve the lot of others, or strikes out against injustice, he sends forth a ripple of hope."

And Linda Darling- Hammond's last words, 'keep you hand on the plow ..hold on'.
Posted by Bruce Hammonds at 1:55 pm

If only school principals would get together to put up real resistance to this so called 'scientific management'. Maybe many principals actually believe in what they are being asked to do? Maybe they like being managers and not leaders?

The scenario Darling -Hammond is talking about is happening in New Zealand - the question is will New Zealand principals be courageous enough to confront such a counterproductive ideology? The only way is to work with others. Let's hope so!

The agenda is obvious to me. Creative,holistic or personalised teaching in opposition to the business efficiency psueudo scientific model so loved by conservative politicians.

It is a simple case of Henry Ford versus John Dewey. Growth, evolution and diversity versus mass standardisation.

A choice bewen a return to Victorian 'three Rs' or the habits of mind to thrive in the future.

A choice beween measured and graded achievement and developing the gifts and talents of all students.

I am suprised that schools seem to ignore where they are being taken. I guess most of them are only managers not really leaders?

Fish , the saying goes, are the last to discover water!

*sigh*, at the very end, only those that take in their hands their own education and improvement are the ones that actually get the skills and can provide the results mankind needs. The others... are nothing more than slaves in fancy suits :(

Thanks so much for the post, very helpful info.