Another expert on teacher quality? Disruptive or dangerous? 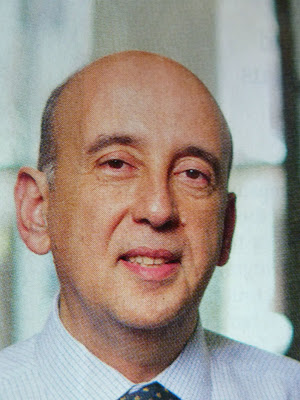 Gabriel Makhlouf  - the new secretary to the Treasury, according to an article in the latest Listener, has 'pounced on teacher quality as the big idea that Treasury will push under his leadership'.

Three out of ten students leave school without NCEA level 2 ( sixth form) and this level , it is believed, is the level of education required to get on in life. So ensuring as many students achieve this level ( one of John Keys's new goals) is linked to the prosperity to the whole country.

The whole issue of failure Makhlouf, along with other right wing ideologues, is one of teacher quality. His answer is to sort out the good teachers from the bad and recognise and reward ( or punish) teachers through performance pay.

Makhlouf's advice to the government is to increase student teacher ratios and spend money saved on improving teacher quality. The issue of the relative unimportance of class size is based on research of John Hattie whose mega research ( of American education!!) indicated smaller class sizes have little effect on progress ; what really boosts achievement is how teachers teach, how they engage with pupils and how much detailed feedback students receive.

However, the Listener article states, that Makhlouf does not have the backing of Hattie on the alleged failure of the New Zealand system. In the forward to his book Hattie says, 'We have a nation of excellent teachers' as shown by New Zealand ranking in the top half dozen nations in reading, mathematics and science. If our scores rose higher, according to Treasury ' pretty powerful research' we could increase our GDP 3-15%.

No one would challenge Makhlouf's assertion that education is the key to economic success but how one defines achievement ( in a narrow literacy / numeracy sense, or the development of student's talent and gifts) needs debating. And as for Makhloufs enthusiasm for performance pay, once again, this depends on what is counted as achievement. Performance pay has had a checkered career in the US. Makhlouf , being an economist, believes it is all about collecting data to measure success. Simplistic stuff - important learning  attributes defy easy measurement.

Makhlouf's image of a good teacher is one , 'who stand up in front of a classrooms and inspire children to do great things'. Now I am all for inspiring teachers but  teachers who inspire students to do their own learning, not to transfer accepted wisdom to large classes of willing listeners.

I think Makhlouf's views on education reflects his British boarding school background. There is no doubt he is a bright individual but one wonders how in touch he is  with the reality of classrooms and modern educational thinking. I wonder if he is as keen for his own children to be taught in a state school in a class with a large numbers of students?

Evidently Makhlouf was appointed to provide some 'disruptive thinking' in the public service - which is to say cost cutting thinking along the lines of the current government.It is  interesting to note that another English import has been appointed Secretary of Education - her expertise is in establishing charter schools ( called academies in the UK). Not that the UK economy, or their educational results, are much to admire. As mentioned  New Zealand  has been at the top of  international surveys for decades.

The socio economic influence on achievement gap is downplayed  by thinkers such as Makhlouf. The Listener article  said that the one question that made Makhlouf uncomfortable was the question of inequality. The Listener article correctly states that  that the Treasury policy direction for the past thirty years, one of promoting market forces in the economy, has been a factor in creating  widening income inequalities and, in turn, the worrying achievement tail.

And Makhlouf is dismissive  of the thesis of the book 'The Spirit Level'  that societies with greater levels of income inequality have poorer social, crime and health outcomes. Such ideas he cavalierly dismisses as 'simplistic'.

Makhloud concludes his interview by saying, 'I'm passionate about organisations having a purpose' - the trouble is that his purpose might not be a positive one for the development of education in our country.

Maybe he should a take a trip to Finland - but that is a country, admired by the author of 'The Spirit Level',  which wouldn't welcome his market forces simplistic approaches to education.

Makhloud may be 'disruptive' but he is also destructive to the inclusive  values we hold ( or used to)  in New Zealand.

A link about teacher evaluation
Posted by Bruce Hammonds at 12:20 pm

Beware of anyone who advocates Performance Pay. It only works if there is an uncapped amount of money to reward. Otherwise someone goes without for someone else to be rewarded.

One would think this guy would be more concerned about his own area of expertise. Oh that's right every Treasury forecast has been wrong for the last three years. Perhaps he's not an expert there either.

Performance pay is a way to conform people to whatever expectation/targets people set -usually easy to measure things for ease of collation and comparison. New York tried it and have since dropped it. The trouble with such targets is not the ones you hit but the things you miss because you weren't looking!

Treasury,as you say, have a reputation for making wrong predictions.

Blaming teachers is easier than facing up to inequality - poverty.

I think Makhlouf's nonsense is well summed up in that excellent magazine you write for Bruce (Education Today). In the James Stapleton article 'Do Class Sizes Matter' he says, "There is little doubt politically motivated policy writers 'cherry pick' international research to suit their intended outcomes. I particularly like (NOT) Makhlouf's comment on television that increasing class sizes will lift the social wellbeing of NZ by 3 to 15%. This ridiculous twaddle is being foisted on an uninformed NZ public by a government hell bent on teacher bashing as an ideological means to an elitist end. Unfortunately due to the fearful and trembling principals and boards this country is now saddled with they most likely will get away with it.

Treasury Secretary Gabriel Makhlouf words evoke images of the fox let loose in the hen house. They are particularly silly but, as yet, haven’t attracted any real opposition.

He says, “teacher quality had the largest '’in-school’ influence on student achievement.” Well hallaeluja, what insight! But this weasel statement doesn’t actually allude to the other 5.5 days in the week or the other 13 weeks when kids are on holiday.

The Treasury paper is blaming teacher quality on a range of social issues that lead to low academic performance instead of actually addressing the core issues. It is a means to lower the overall education spend – nothing else.

Like your previous commentator I also take issue with Makhlouf’s unsubstantiated and quite ludicrous comment, “If overall student achievement was lifted to among the top in the developed world, GDP could be 3 to 15 per cent higher by 2070.” I doubt very much he will be around to eat humble pie seventy years from now!