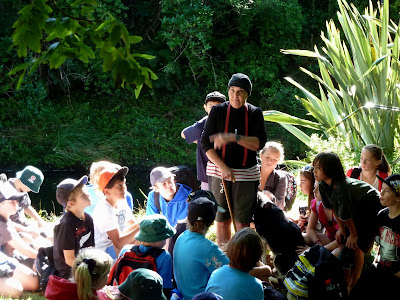 Yesterday I was 'invited' to act as a parent helper for a team of three classes walking the Te Henui track which begins near their school  and finishes at End Beach New Plymouth.

It turned out to be a very pleasant day and it was fun just to be helper to watch the three teachers organise a very successful outing. Most of my own teaching career was as a science adviser assisting with such trips and at one point I was deputy principal of nearby school and the Te Henui was a favourite study area for my class. One of the teachers was a good friend of one of my ex pupils!

I was very impressed with the teachers organisation for the trip and the enthusiasm of the students.

The walk begins with a bush track winding along the side of the Te Henui River. The students had photos of plants to recognise and this provide popular activity. Digital cameras make such a simple worksheet  no trouble to prepare.

To be honest I don't think many of the students could recognise many plants but by the time they had reached their destination I am sure they could identify quite a few -  but most of all I think that they had become very aware of the range of native plants that grow along side the track.

Studying the plants was just one of the activities undertaken.The main aim of their walk was to discover the potential of the Te Henui as a tourist walk and to think of ways to make the walk more popular but there is no doubt that, later, the classes could follow up on their introduction to plant life. The walk included excellent areas of coastal rain forest as well areas of introduced trees planted by friends of the Te Henui  as part of ongoing Arbor day plantings. Another area of interest was an awareness of the range of weed plants that had colonised the bush areas.

To add  greater understanding of the plant life  Ms Valda Polletti, from the Friends of the Te Henui, provided insight into the development of the Te Henui and the ongoing problem of weed control. The students were very attentive and asked good questions -a study of garden escapee plants ( now seen as weeds) could be another future study?

During a morning tea break one of the teachers gave a potted history of the meaning of Te Henui. Students acted out a small battle scene of an unfortunate incident when local Maori were involved in repulsing invading Waikatos. Evidently a friendly local tribe  decided to join the defender in the night and were mistaken as the enemy. Te Henui means the big mistake! The Te Henui has a number of important Maori pa sites - once again another possible future study?

The  walk  finished at the river mouth where  pizzas were delivered for lunch.

After lunch, my assistance  no longer required, I walked back to school.

In the afternoon the students were to make Maori pas in the sand and to go roller skating at the rink before returning to school by bus.

The weather was fine  and we all enjoyed our day. It was great to see how involved the students were in learning outside their classrooms.
Posted by Bruce Hammonds at 1:25 pm

It is really good to see students exploring their immediate environment.