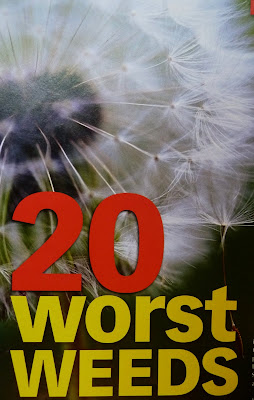 'Teaching', wrote Jerome Bruner, 'is the canny art of intellectual temptation.'   A creative teacher is aways on the alert for ideas to introduce to his or her class to 'temp' students into learning about things they may not other wise notice.

I  recently picked up a copy of the New Zealand Gardener (April 2008)  and an article on New Zealand's  20 worst weeds caught my attention. If I was a teacher  it would make an interesting inquiry/research/integrated study for my class.

The article set out to 'name and shame' 20 of the worst weeds in the nation - most of which were introduced originally as popular garden plants. That they have 'escaped' to now be seen as weeds is in itself is a good lesson to the students about unintended consequences.

I wonder if students were asked how many weeds of any sort  they could name? Their answers would show the 'prior' knowledge they would bring to such a study. I doubt if very many students could think of more than a few -even if they worked as  group to pool ideas!

These days strict bio security and  quarantine regulations  do their best to keep unwanted plants out of the country.  The students might think of how early weeds were brought to New Zealand. Some were garden plants that thrived too much in our climate while others were introduced by accident. Why does New Zealand have such strict bio security rules?

It is interesting to know that New Zealand natives can turn into weeds in other countries - the Karaka tree is seen as a weed plant in Hawaii as an aggressive coloniser suppressing the growth of Hawaiian natives. Manuka is another coloniser in Hawaii. Native flax is seen as an invasive plant on the Atlantic islands of St Helena Tristan da Cuna - it was originally introduced as a plant to make rope from. Even our Pohutakawa is a nuisance in South Africa and is seen as an alien!

Students only have to visit any waste area , or neglected garden, to see how weeds soon take over.

It would be worth thinking of a definition of a weed -a  very successful plant that has way of growing where it is not wanted. Research would show how individual weed plants are adapted for success. 75% of our weeds are escaped garden plants.

If I were a teacher I might bring a few weed plants along to school to research. In earlier days this was called a 'single plant study'. Students would observe, draw, measure and describe  and do their best find out common and scientific names. Most of all they would consider why the plants was successful - and how it ensured its survival.

The work of Darwin and early naturalists like Sir Joseph Banks could be introduced.  Using the Internet other famous naturalist, international and New Zealand  based, could also be researched.

Gardening parents could be called on to suggest weed plants - or help with identification.Digital or phone cameras are excellent for gathering images. Local councils,  conservation or garden centres could assist with identification and where  plants originated from.

Some of the plants mentioned in the article that had escaped form our gardens were:

Some students may like to research how to kill/ control plants but should not be involved in handling sprays.

The March 2007 magazine featured another 20 lawn and garden weeds including:

So if someone calls you a 'weed' - say thanks it's a compliment - a plant that can survive.

At the end of such a study it would be interesting to know how many plants students could name -and why such plants are so successful.
Posted by Bruce Hammonds at 12:35 pm