Paul Tough on poverty :'How Children Succeed - grit, curiosity, and the hidden power of character'. 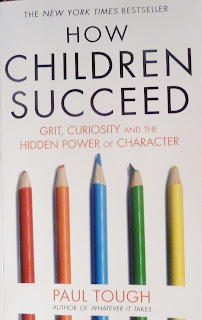 In classrooms such students need help in developing non cognitive qualities required to ensure success. By providing challenging programmes  and by deliberately teaching the mind-sets to cope with learning – the habits of mind – grit, resilience, perseverance and optimism, those children will learn.
Tough points out that we now know enough to influence the development of all children; we know enough about the kinds of interventions that will help children develop those strengths and skills, starting at birth and going all the way through schooling.
But only, it seems, if we change our own minds first.

Posted by Bruce Hammonds at 2:43 pm

Wonderful blog - what a great message. Thank you for sharing the book.

Excellent, Bruce. Politicians interested in the common good, as opposed to fostering business opportunities, should read this. I've included this in my next Educational Readings, due to go out tomorrow.

YES! YES! YES! This is exactly what is needed for a stable and sane life, for security and adaptability, and for meeting the challenges of life. My son is naturally very impatient as am I - it has impacted my life greatly (negatively, as you would imagine). I did not want this for mu child, so I started researching. All the research told me the best thing I could ever do for him is to teach him persistence, self reflection, and so on, and although he is only 4 it is already working so well. As always you share sensible, useful and honest information for parents and teachers. Thank you.

Thanks Allan and Diane. Appreciate your feedback