Lester Flockton:National Standards and PaCT – no way to solve the problem of student underachievement..

Lester Flockton’s article in the latest New Zealand Principal’s Magazine (June 2013) is worth sharing. Lester is a highly respected NZ expert on assessment.

Make no pact with PaCT!


‘National Standards were foisted ( forced if you prefer) upon New Zealand schools ….by a Government that naively, yet steadfastly , believes this is the way to overcome underachievement for a fifth or so of our students…. America has No Child Left Behind (and the disadvantaged are still behind).England has Key Stage Assessment …( and underachievement continues apace among the disadvantaged). Australia has NAPLAN, which is denting schools and teachers, but not underachievement. Yet until the Key Government arrived on its high horse , saddled up with Bill English’s National Standards, we had no such all –consuming, time- robbing, resource –diverting, ill-proven , technocratic industry.
So thanks to politically packaged half- baked knowledge about determinants of learning and achievement and outright dismissal and intolerance of any robust counter-evidence, we too have climbed aboard and are playing games like America, England and Australia with non-negotiable rules pronounced from on high and policed by the Minister’s Ministry’.
‘New Zealand’s game plan, however’, Lester writes, ‘differs in one very significant aspects from the others’ In New Zealand results are not made just by tests but also by ‘teacher overall professional judgment ( which may include mandatory test results)’. This believes Lester is a stroke of enlightenment but has led to the issue of variability of judgment within and between schools not helped by the ‘recognition that the standards were shamefully concocted, confusing, riddled with curricular flaws’.
These predictable inconsistencies  ( says Nigel Latta) make any data collected difficult. The Ministry is to publish school comparative data in the near future based on these ‘shonky’ standards ( to quote the Prime Minister) interpretations.
The Government by spreading the false belief that their National Standards will solve the 1 in 5 students failing now have a problem – one of ensuring consistency and to solve the problem they created they are developing resource to ensure consistency between teachers and schools.  Lester quotes Bill English’s claim in the budget that ‘this initiative will make sure that the data teachers use to assess students against the standards is reliable and valid ‘.

Lester responds to English’s’ claim by writing, ‘ Surely Mr English must know by now, that no matter how much political spin is ladled out nothing “makes sure”…of reliability and validity’.
PaCT  ( progress and consistency tool) is the creation of the  Ministry to achieve this reliability but this Lester writes ‘ won’t properly solve the problem  until the wobbly definitions and descriptions of the actual standards from which the data is derived are overhauled and re-written. But also bear in mind , none of this will solve the true problem underlyingunderachievement amongst disadvantaged or difficult children’.
According to the ministry the tool is based on the same principles as the standards themselves, requiring a variety of evidence of learner achievement as the basis for overall judgment and will enhance the ability to track learners’ progress in relation to National Standards.
It is worth remembering, at this point, that both National Standards and PaCT focus on two learning areas only ( literacy and numeracy) and  ignore children’s’ abilities in other equally important areas. Both lead to the narrowing of the curriculum, the ignoring of students’ diverse talents and strengths and contribute to the side-lining of the excellent 2007 New Zealand Curriculum. 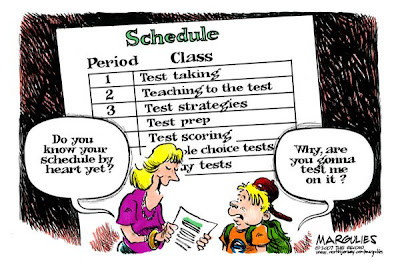 Some price to pay for political interference! Behind comparative school data has more to do with their privatisation agenda by targeting failing schools and teachers .
If PaCT were to be made mandated then it will further undermine any professional trust that teachers have in the Ministry. At best, Lester believes, PaCT should be seen as a ‘tool to assist schools ‘…..’for in-school use only’.


Lester concludes, ‘Only once the full design, procedures, and uses of PaCT are officially revealed will it be possible to decide whether it is professionally advisable to enter into a PACT with PaCT .
If the tool, is also to be used for more and more funnelling of data to the Ministry of Education, then it likely to become yet another PACT: Performance Accountability Control Tool.

For and against Charter Schools and creative alternative.
Posted by Bruce Hammonds at 9:42 am

It's also important to remember that Lester Flockton and Terry Crooks identified 9 threats to validity in a seminal article... thIs still resonates with me many years later...!

Can you explain the 9 threats for me?