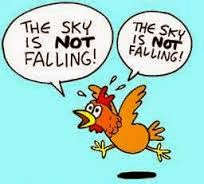 introduction of National Standards will solve the situation.  ‘We so often hear stories about how standards have fallen,’ said Latta, ‘that you would be forgiven for thinking the sky has fallen in’.

With this in mind I was very curious about the conclusions Nigel Latta would come to after returning to school classrooms to see for himself. . 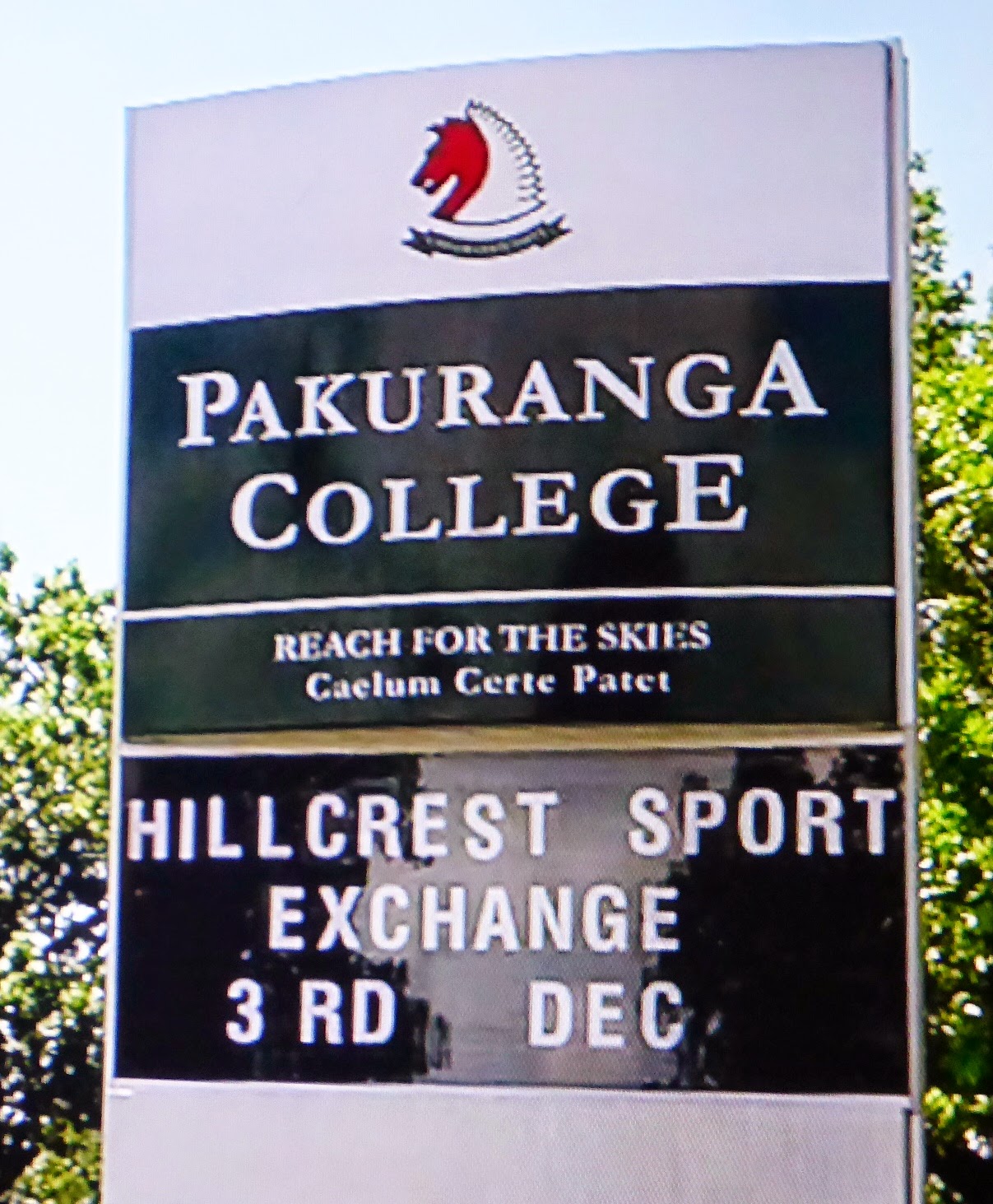 The two schools chosen to visit were Pakuranga College, a co-ed secondary school, and Point England, a low decile primary school. He wanted to get a grasp of how things like the basics were being taught.

What he found out was that schools were very different from his own school days.

Today it is about helping students discover meaning while in his day, teachers had the ‘knowledge’ and they passed it on to their students.  Nigel reflected that he hated his own secondary schooling which ‘was boring. You sat down and shut up’. Nigel was to be very impressed with the involvement of students in their own learning during his class visits. 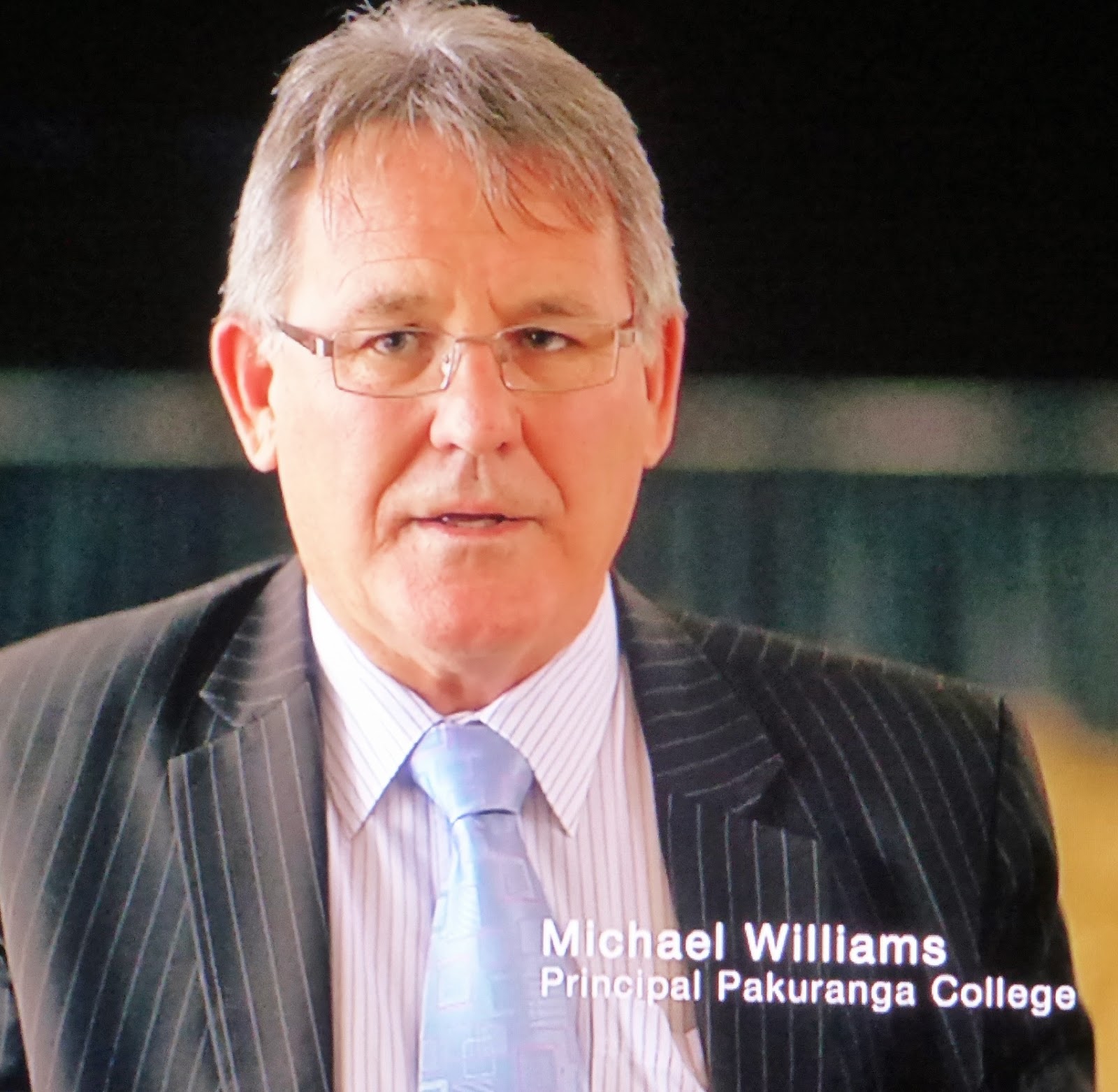 His first visit was to Pakuranga College.

He wanted to find out about NCEA (National Certificate of Educational Achievement) which, even after a decade, many parents are still confused about. Many older parents sat School Certificate. Why had things changed? The principal, Michael Williams, answered by saying ‘with SC half the students failed’ and that in the past ‘school was a very effective sifting system and that NCEA changed the mold’.

So Nigel thought it might be fairer, but was it better? Prof Stuart McNaughton reported to Nigel ‘that NCEA gives a full picture of what a student can do….ranking exams like SC give a hard-nosed high stakes assessment…NCEA is fairer’.  The introduction of NCEA had changed the curriculum and the way things were taught, ‘education was once about replication today it is about problem solving’.

Nigel sat in a number of classrooms to see for himself, much to the amusement of the students.  His experience of Design Technology left him amazed when he observed students experiencing ‘ a range of complex skills relevant to the real world.’ Sitting in on  physics  was another powerful lesson for Nigel as was English

He wondered if in this exploratory process was academic knowledge  being lost?

For an answer he turned to Prof John Hattie a world recognised authority on educational research. Nigel wanted to know how well we were doing in education and ‘why we are always led to believe there is a crisis?  Hattie replied that ‘fundamentally we have a very good system and this is entirely credited to the quality of the teaching profession’. This is in contrast to what some politicians tell us! 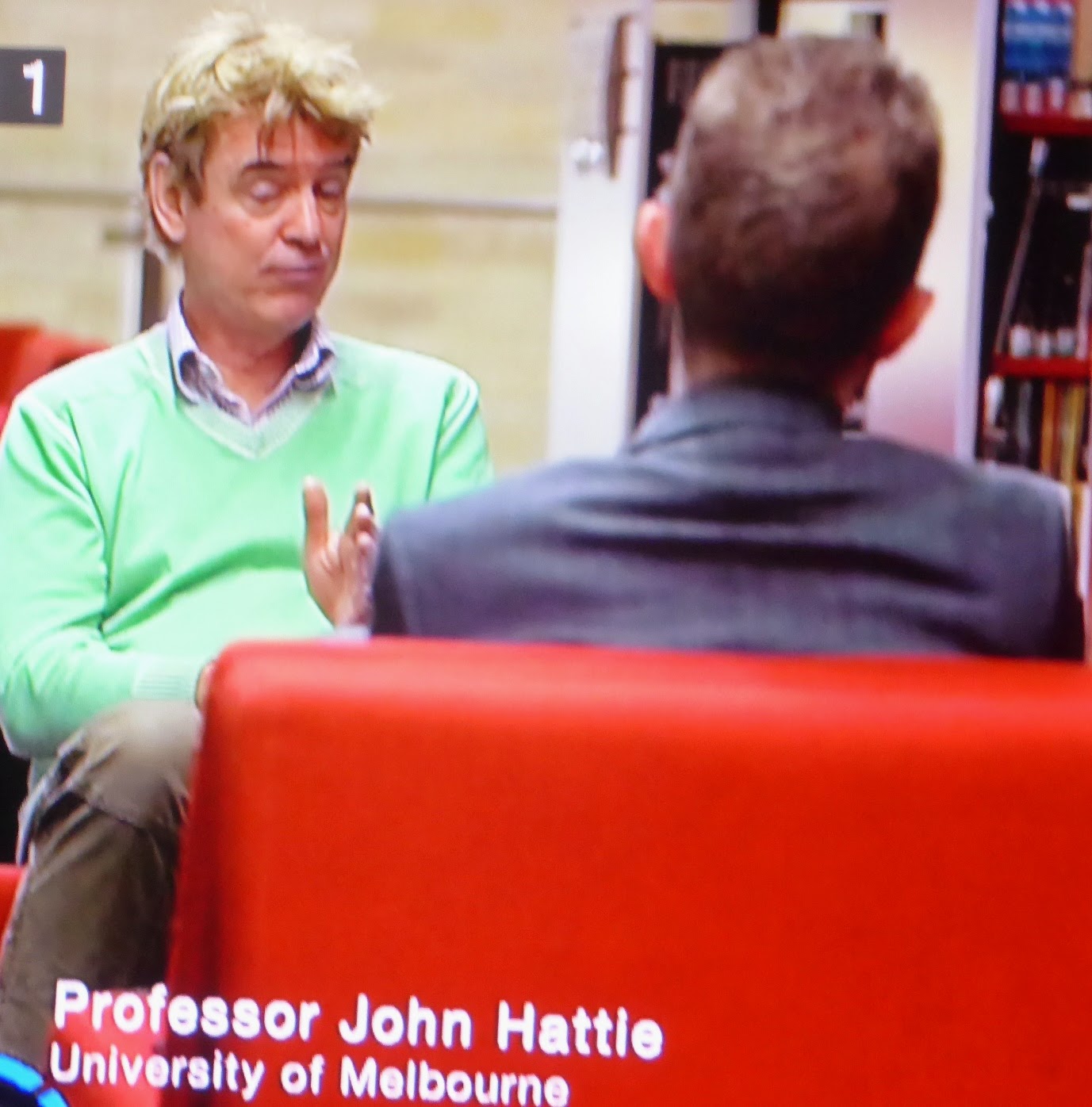 Prof Hattie told Nigel that ‘the purpose of education is to help students exceed their potential’ and that good teachers ‘care passionately to see something in their students’and added ‘luckily we have a lot of passionate teachers’.

Nigel sat in a maths lesson to see if students were being taught maths properly. The maths teacher explained that today maths is about learning strategies and that in the past, maths was about getting the right answer. In the past few people experienced mathematical thinking and as a result ended up hating maths. ‘Students need to play with maths to solve problems rather than follow procedures without understanding’. The students were learning and enjoying maths in a way that Nigel never experienced in his school days.

What about private schools? Do these schools provide a better education? John Hattie's research indicated ‘that they offer little advantage but it is what parents believe’.

John Hattie’s advice for parents selecting a school for their children is to walk around and see if the school is an inviting one; schools that focus on students learning in a safe environment.

What about Maori and Pacifica kids – the kids who are lagging at the tail end’? What does being in a lower decile school mean?

Many parents equate decile rating with the quality of learning in the school. ‘Is this true?’ wondered Nigel. John Hattie, if he had his way, would do away with the deciles. ‘They are criminal if seen by the parents as a proxy for quality. They have become league tables and this is  100% wrong. Some of the best schools are low decile schools.’

To explore this issue Nigel went to see for himself at Point England, a decile 1a primary school.

The ten deciles are based on household incomes. Russell Burt, the school principal told Nigel that Point England students  ‘generally, at the age of five, enter school with an academic age of around three’.  'The average income of a decile 1a family  is $19,000 and the school provides  breakfast for a number of students whose parents can't afford a decent breakfast.'

Nigel’s first primary lesson was maths where he observed kids working in small groups solving problems. The teacher explained that as children worked at different levels they work collaboratively, making use of computers, helping each other; ‘kids are enjoying maths – it makes maths not such a big brick wall’.

Point England is a school determined not to be defined by its decile level. Technology is integrated into all activities and the school is networked with 11 other schools, which Nigel thought ‘pretty amazing’.The whole community is linked with WIFI so children can learn at home.  Children have the opportunity to acquire their own digital device – something the parents wanted for their children and they contribute $3.50 a week do so.

Nigel was reassured by the principal that computers and group work do not come at the expense of ‘real’ learning. The school works closely with its parents who are supportive and know their children’s achievement levels and progress. Achievement levels have picked up with the introduction of digital devices, technology and open space learning. Technology has enabled the students to share in a way that it is hard to do with pencil and paper. Individuals can even learn with their computers in the holidays.

As an aside Nigel saw no behavioural issues and this he felt was because of the culture of learning they have built up – the ‘students are able to manage themselves’. It’s the culture, the expectations, the teachers, not the decile rating that makes the difference.

Nigel wished he had been a student at Point England School when he was a kid.

With regard to National Standards the school struggles despite enormous success. Students who start a couple of years behind do catch up at year 6; they have made great gains but it is not reflected in the Standards. The standards, comments Latta, ‘are too narrow and don’t reflect the huge strides the children at Point England have made’ ‘There is a need to rethink the National Standards.

Point England is a school respected and visited by other educators – Google even visited to make a documentary about the school! The big thing is ‘that the kids are not limited by what others think they should achieve’.

Nigel’s last lessons were back at Pakuranga College.

There is, he said, a lot of talk about the so called ‘soft subjects’ of the NCEA. He took part in a dance class and observed year 12 students panel beating. The dance class involved Nigel in an area beyond his expertise and he found it absorbing. In the panel shop he observed students who otherwise might have left school – students who like hands- on practical things.

Dance and panel beating – essential learning for those students who are attracted to such diverse learning experiences- are both respected as areas of valuable learning.

The principal commented that such courses break down the barriers between vocational and academic learning. Practical learning keeps students in the school environment. In the past, the principal said such students would have dropped out.

John Hattie commented to Nigel that traditional schooling privileged a certain group of students and that in contrast  the diversity of NCEA is a way to develop entrepreneurs, musicians  and people equipped to work in the service industries. ‘There are lots of ways of being excellent’. 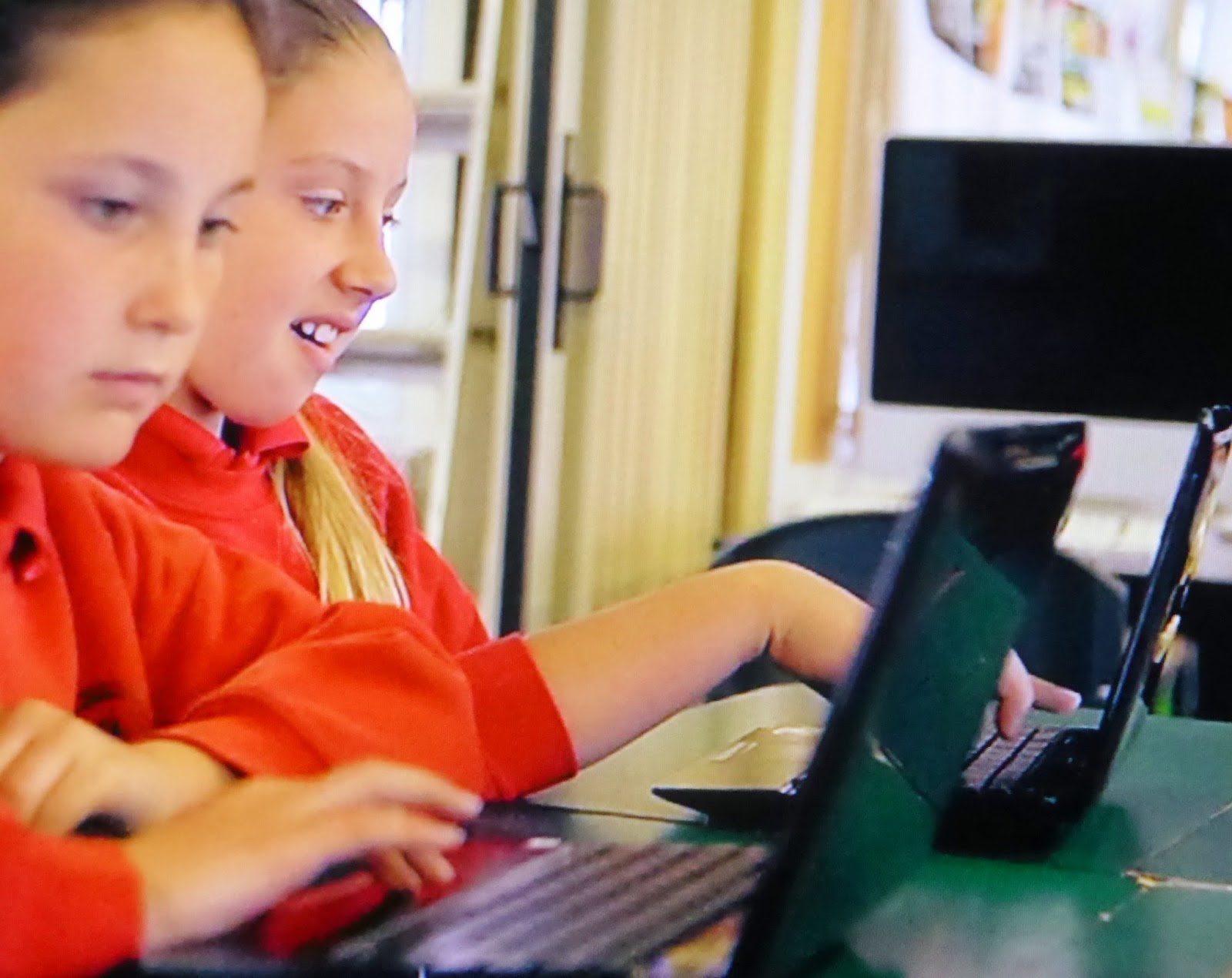 There is no doubt Nigel’s return to see schools in action for himself was a revelation.  ‘It is not schooling as I knew school…it is about creating citizens’; students who will be well equipped to thrive in an unknown but exciting future.

There is no crisis.

No need to worry. 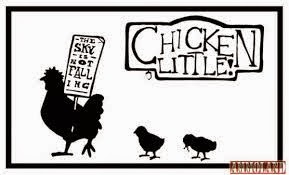 Russell Burt from Point England was appreciative of the above but to clarify the issue over National Standards sent me this to clarify the position re standards.

'With respect to your commentary regarding Pt England and the National Standards;

-Our gains are reflected in the standards and are very significant. Its just that what the public sees at early and often only glance of National Standards data, is position rather than progress. If we were judged more by progress than position we would be judged (and were so by ERO) as a very high performing school.

Our concern as a learning community is more about how judgements are made, than about the standards themselves'.
Posted by Bruce Hammonds at 11:34 am

Having visited Point England School recently I have to say that I was really impressed. The students were thoroughly engaged in their learning, and were using technology in an integrated context. I agree with the principal that National Standard "high stakes" assessment and reporting in no way reflects the progress of the students or even more importantly the engagement of students in their learning.

I value your opinion highly so if you were impressed it must have been impressive!!

I totally agree with John Hattie.
We have one of the best education systems in the world on all levels. The countries that score higher than us are mainly monocultures and so have high societal expectations that support the education system. As New Zealand is such a multicultural country, we have devised a system that not only caters for different societal expectations but also different cultures and beliefs.
We are not there yet but we are well on our way to developing a system that allows all students to excel. All parents, families and whanua need to do to help their children achieve at school, is make sure their children get to school every day and create a settled consistent home environment. Schools, families and community working together ensures that children will not fail.