The October ‘North and South’ Magazine featured an education essay on National Standards  written by Jolisa Gracewood who has seen the results of standard based assessment in her son’s primary school  in the United States where small children face a battery of tests. She asks if that’s want we want for Kiwi kids?

The essay is well worth a read.

This blog shares some of the main points. 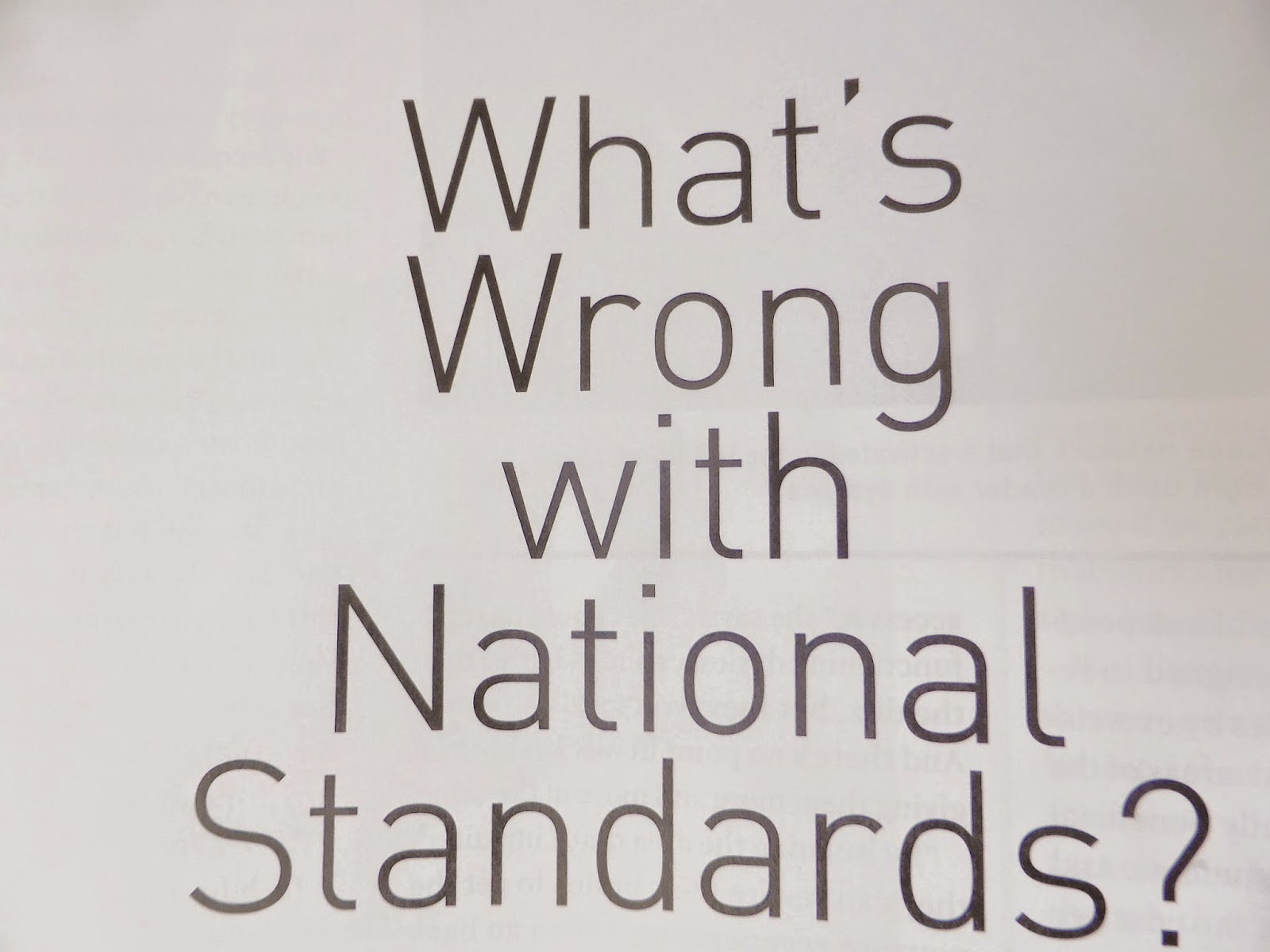 At a pre-election meeting held at Ponsonby School Peter O’Conner ( School of Education Auckland University) said, echoing the findingsof a recent Nigel Latta TV programme on education, ‘there isn’t a crisis in education’ and then introduced the elephant in the educational equation – poverty.

When her turn came Hekia Parata (Minister of Education) introduced her catch cry for the transformative power of education, ‘decile is not destiny’ and that National Standards are a ‘proudly democratising tool’.

National Standards got off to   bad start, writes Gracewood, introduced as a post-election surprise and rolled out with minimum consultation they were ‘opt in ‘at first but then made compulsory. The process was a blow to the co-operative spirit established between the sector and the Ministry.

The idea of National Standards is simple enough: for Years 1-8 schools must report twice a year how well children are doing in reading, writing and maths, relative to a given standard.

Children are ranked in four categories: above standard, at standard, below, or well below. As Gracewood writes, ‘at first blush, there’s an old fashioned straightforward appeal – it’s the Three Rs in modern dress’. Gracewood has two reservations – there is no category for well above and if the whole curriculum is crucial, why require reporting on only those basic skills?

Parata has said that National Standards ‘are to education what pulse and blood pressure are to a GP’ Gracewood  checked with some doctors who said that they mostly confirm what they knew already and that they are an incredibly narrow part of an overall assessment. 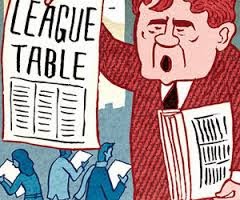 Meanwhile, third parties have complied league tables that compare schools according to their National Standards results. And if you’re not happy with how your local schools perform charter schools await to ‘provide parents with choice’, as the government tells it.

Gracewood writes with the experience of her own children experiencing the effect, while living in the United States, of the No Child Left Behind (NCLB).

In the US children experience compulsory multiple –choice tests that begin in Year Four. The original goal of the NCLB was – like National Standards- was to identify struggling children and lift their achievement. The NCLB offered a simple proposition: test children on basic skills, and make sure the numbers go up year by year.

Gracewood worried that the school her children attended, chosen because of its inquiry based approach, noted that the inquiry approach was being edged out by a test based focus. As the stakes were high students were being trained in test taking and the school struggled to make the mandated ‘adequate yearly progress’. On top of this there was the risk of being put ‘into administration’, or being supplanted by a charter school. Despite the teachers’ best efforts the learning of every child in the school was subtly shaped by persuasive test anxiety, to the detriment of other kinds of learning.

Reluctantly Gracewood shifted her children to a school in a more prosperous area where the tests were more a passing nuisance.

Gracewood’s experience led her to question where National Standards might lead New Zealand education and wondered at what point would the ends might shape the means – and whether people would notice the incremental transformation. Maybe, she wondered, National Standards wouldn’t be as bad as NCLB. Or maybe it was the thin edge of the wedge.

Moving back to New Zealand her children’s experience of their primary school (Point Chevalier) ‘blew my children’s mind…there was joy in the air, and creative energy in the classrooms. ‘National Standards results appeared on their report cards but there were no compulsory tests results. Point Chevalier, like the Gracewood’s second well off (high decile) American school had little to worry about. Point Chevalier’s principal Sandra Aitken commented, ‘we have the luxury of our kids achieving pretty well’.

Although less than impressed with the way National Standards were imposed she conceded one positive aspect: ‘It was the first time that overall teacher judgment, based on multiple sources of evidence was recognised in writing’.  Primary schools had always already gathered and shared such information with parents and used it to inform their teaching.

As for the standards Aitken says ‘she doesn’t have a problem with the idea of having some signposts about roughly where we would like kids to be but I’m just not a 100 per cent convinced that the child who’s always "below" needs to hear that time after time. Often we’ve made a significant difference, but they’re still below standard.’

The joke amongst schools is that National Standards are neither national nor standard and Gracewood wonders if this system might lead to an induced demand for some kind of universal nationwide test.

Aitken doesn’t want national testing nor league tables even though her school would come out pretty well and she is vigilant that her school does not let an emphasis on standards narrow the curriculum something she sees as a real risk for schools that are worried about being unfairly compared to other schools.

Gracewood wondered about the effect of National Standards  reflecting on her children’s first American school?

To find out she visited May Road School in Mount Roskill a decile 2 school where three quarters of the students have English as a second language.  Principal Linda Stuart states while that they have a number of issues associated with poverty the school’s families do the very best they possibly can with very little.

Is decile destiny for these children and their families?  Stuart reckons with political will and proper support they can be raised up educationally but neither National Standards nor league tables are helping the process. Stuart worries that the introduction of National Standards has hindered the holistic approach that has been wonderful in addressing the needs of her pupils.

‘The thing is’, says Stuart, ‘success looks different according to where you are working from. Many of our kids are on the back foot to start with... the data  doesn’t capture how much progress students have made…they are measured against the benchmarks that every other child is measured against, which gives it a false perspective about where the school as a whole is at.’

Stuart believes the answer is to emphasize the children’s accomplishments and by providing opportunities the children wouldn’t get otherwise. ‘If we could get that happening throughout the country we could shift a lot of things....My students are just as eager to learn but they are starting from a much harder place.’

Gracewood recalls Parata’s line about the ‘profoundly democratising’ effect of all schools being held to the same standard; no child being left behind but as one teacher says, ‘it is not a level playing field- so why measure and report as if it is?’

At the meeting Parata had spelled it out.

‘The students who have been left behind are Maori, Pacifica, come from poorer homes, have special education needs, or a combination of all four. Our challenge is both to lift up those who have been left behind, and push up those who are already doing well to do better.’ None of which is news to anyone Gracewood spoke to. But on the evidence, it wasn’t clear that National Standards was doing anything more than measuring the field again.

Decile nneedn't be destiny, but it is a powerful factor.

Even in a well off area, socio-economics matter. ‘They talk of one in five kids failing’ says Sandra, ‘and one in five live in poverty. Can we not see the connection?’ And she points out, ‘even in decile 10 schools have decile one families’ who fall between the cracks.

One criticism Gracewood heard of National Standards was that, like No Child Left Behind, it tends to encourage a focus on children just below the line. If schools can bump some of that group into the ‘at’ category their profile instantly looks better on a comparison chart.

Standards also send mixed messages about the value of a school as a whole too. Schools in which half the children meet or exceed the standard can still be read as ‘failures’ , even if they’re helping their students and communities to be the best they can be.

Schools are being given huge responsibility for outcomes beyond the school gate.

National Standards, league tables and charter schools were presented as being things parents asked for – but did we asks Gracewood?

What is wanted is a proper conversation about education not just with the government, but with parents and the wider community. ‘When we have that conversation’, says Linda Stuart, ‘when politicians really listen to what we’re saying, then we will have the most wonderful education system in the world’. 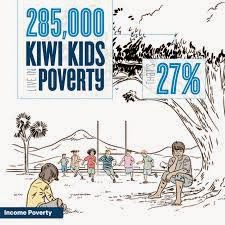 As the meeting concluded Gracewood thought back to Peter O’Conner’s image of one in five children setting off to school from homes suffering from poverty - ‘the elephant in the room trumpeted soundlessly’.

(For anyone wanting to experience the consequences of   national tests and league tables need look no further than the Australian school system)
Posted by Bruce Hammonds at 10:01 pm