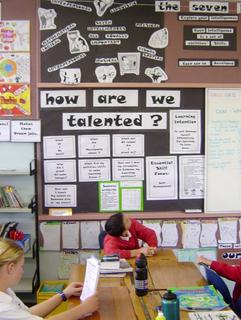 Do we really know the talents of our students?

It was interesting to read in the Sunday paper about how writer and biologist Lloyd Spencer Davis recalled the day he eventfully defied his school career adviser who was suggesting to him that his marks in history and maths suggested a career in business or law.

Spencer Davies protested he, ‘cared more about kingfishers and pied stilts - even bloody eels- more than the Great Depression or balancing budgets.’ None the less he signed up for the subjects his career teacher advised.

At the same time the author was reading a book ‘Quest for Paradise’, written in 1960 by biologist David Attenborough that ‘stuck in his mind’. ’It exuded a passion, not just for the story, but for adventure itself.’ Attenborough’s book illustrated the world, not a place to be subjugated (as in history) but a place to explore, where other different cultures were to be celebrated and be fascinated by. The writer was impressed with Attenborough’s quest to study the birds of paradise his deep-felt passion that drove him even through considerable hardships.

While reading the book, Spencer Davies had what he called ‘an epiphany’ and realized he didn’t have to do what the career adviser had suggested and that he could be his own man; a man of nature. He thought that it mightn’t make him rich but that he would be happy. He envisioned a career would that would allow him to realize his passion and offer adventure.

The next day he changed his options

Currently Spencer Davies assists with enrolling students at university and is concerned that every year he gets an alarming number of students who ask, ‘what should I do?’ For these students he gives them the same advice, ‘do what is in your heart’, the advice he gained from David Attenborough.

The story illustrates something is rotten in the state of education. Shouldn’t an education system be about helping every learner develop their particular talents, passions and dreams? Shouldn’t teachers see their role as developing an individual learning pathway for every learner one based on their passions, interests, dreams or talents?

I know of one high school system that does just this, ‘The Big Picture Company’, that believes in ‘educating one student at a time’. And at the opposite end of the spectrum the Emila Reggio early childhood schools do the same. In Christchurch, New Zealand, there is the Discovery One School, while throughout the country there are countless teachers doing their best to personalize learning even in an environment that is not always conducive. Our own site was set up to share such innovative ideas.

Imagine though, if talent development was the priority for all our schools. Business writer Tom Peters, in his book ‘Re-Imagine’ talking about US High Schools, writes that we couldn’t have planned a better system to destroy student talent if we had tried!

In the meantime our secondary schools struggle on with their ‘one size fits all’ approach; an approach based on measurable achievement, rather than uncovering and celebrating student talent.

Anonymous said...
This comment has been removed by a blog administrator.
1:40 am

Anonymous said...
This comment has been removed by a blog administrator.
12:41 pm

Have just attended a school jubilee and it was interesting and a little sad to note many people were disatisfied with where they have ended up and regard the time of their education to be a time of lost opportunities and unfullfilled ambitions. While they invariably seemed to blame themselves they felt that apart from the influence and support of a few significant teachers who took a personal interest in them much time was wasted or misdirected in meaningless and unsatisfying activity, particularly in secondary school.

Those who attend school reunions are often astonished to discover how undistinguished their more 'successful' past classmates have become. Studies of high school graduates, in the USA, rarely find any correlation beween high school success and later recognition. What worked at high school seldom works later. Students brought up on success never learn to rebound from defeat. Too much success at an early age can build a fragile foundation; such students learn to play it safe and find it hard to take risks later. Most schools do a poor job of recognising future talented achievers- people who make a real difference. The creative students who do take risks at school are given a hard time. Success at school though seems is just as perilous as failure. Creative kids never let schooling interfere with their education!

Schools are not about education in the true sense of the word.