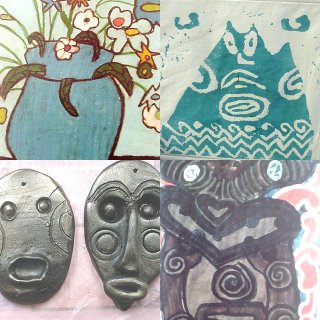 While working recently with teachers I shared with them some of the influences that had created my own particular ‘point of view', or ‘stance’, about teaching. I then asked them to reflect and share their own ‘stories’. Without exception the main influences in ther teaching were other people they had been associated with over the years. I guess we call such people our mentors?

‘Stance’ is the most important thing a teacher has. It is what you stand for. Without ‘stance’ you could fall for anything.

I the early 60s I took part in a course run by the late Gordon Tovey, who was then the National Adviser of Art and Craft This course transformed my concept of teaching and learning. It was in today’s jargon a ‘rich experience’.

During this course we explored the immediate environment, responded to myths and legends, selected classical music and expressed our ideas through drawing, painting, dance, movement and creative language. This was to be the beginning of what came to be called integrated or related art studies. Pioneer teachers in the 50s, such as Elwyn Richardson, had previously led the way.

During infrequent reflective periods, and through ongoing conversations, Gordon elaborated the philosophy behind the course which was one of a series held throughout New Zealand. In reality the activities made the point for him.

Gordon explained that schools too often worked too formally and in the process excluded the imaginative worlds of the learner. Gordon believed strongly in tapping into the creative and poetic powers of inherent in all students while at the same time not discounting more formal traditional approaches. At this time schooling focused largely on an unimaginative approach to reading and maths with other curriculum areas each having their own assigned timetabled time. It was largely a verbal instructional way of learning.

Traditional teaching, Gordon believed, favoured those with verbal and logical capabilities while those with equally strong abilities, personal and collective, were ignored. In many ways the problem persists to this day.

Gordon called these neglected areas the 'creative world' of the learner. He introduced the ideas of philosopher Karl Popper who said there were three worlds:

1 The objective verbal world of things
2 The second world of the inner self
3 The third world of created meanings – the works of creation themselves.

The first world is the verbal word, the second the inner world of thinking; a means of processing ideas; methods by means of which meaning is revealed.

The third is the world of artifacts, or ‘treasures,’ that any civilization leaves behind and were, Gordon believed, to be seen in completed children’s creative expressions.

When a work has been created, in any area of learning, it stands apart from the creator and others can delight in the creativity on display. The creator feels great satisfaction and pride and the 'spur' to continue with further explorations.

For the creator they provides clues for their further growth and are seen as important milestones of their progress but, most of all, they provide children with a sense of mastery and pride of achievement.

These artifacts are completed meanings and are not to be seen as wall decoration. For creative teachers these idiosyncratic creations represent the pinnacle of their teaching. They are tangible reflection of the creative power of their students. Without this sense of power no real learning is possible.

This aesthetic approach to learning is a far cry from what passes as creativity in many classrooms today.

The so ‘called achievement gap’ ( which focuses on the 'first world’) would be solved by an education that focuses on ensuring each individual learner is able to create satisfying ‘artifacts’ in any area of learning. This ‘holistic’approach learning is preferable to the fragmented, overly process oriented, criteria based learning that is all too common today. Poor old Vincent van Gogh wouldn’t have lasted long in our current art classes!

The Ministy thankfully has moved away from it's technocratic standardized curriculum (with all their defined standards, levels and learning objectives) but they still have along way to go to create conditions to allow true student and teacher creativity to flower.

'Their' new Curriculum Document, arriving soon, provides the 'seeds' to encourage freedom and flexibility in 'our' schools. In a way it 'back to the future! Creative teachers need to take advantage of this opportunity. It even mentions a need to develop 'love of learning'.

I wonder which school will be brave enough to make'love of learning' their only ‘target’ for the school?

Such schools would be recognized by the wonderful things the students have created or can do; by the artifacts, the products, of the ‘civilization’ they have together created. This of course would include the students themselves. The technocratic phrase ‘achievement gap’ would now be forgotten as all students would have their talents recognized and valued.

Tovey, in one of his writings, said that such an education would fulfill Einstein’s dictum that the role of schools is not to produce scholars but human beings. Human beings armed with the discipline that they have gained through their own creativity able to resist the ‘soft kiss of permissiveness’.
Posted by Bruce Hammonds at 12:26 pm

Your 'blog' sorts out some of the issues of 'process versus product' for me. I have always believed that what a learner can present, or do, to be very important but it seems to me of late that the process has become more important - all this 'higher order thinking' stuff.

Both are important but what is the point of processing nothing of value - your point I think?

You are so right, teachers with strong beliefs (your 'stance') can always 'sift the chaff from the wheat', particularly if they network with like minded associates.