Mavericks - our only hope! 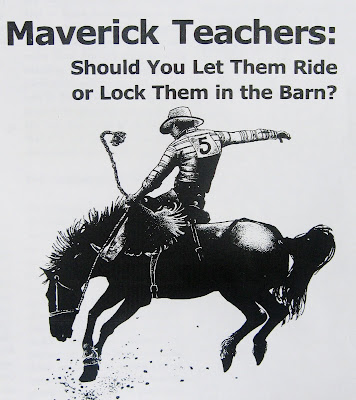 Since Tomorrows Schools of the 80s we have relied on distant experts and, worse still, politicians to determine what goes on in our classrooms.We seem to have lost more than we have gained. And most of all we have lost the insight of creative teachers past and present. And no one trusts Ministry experts.

And as well, by gathering up resource material, it also made me reflect on the creative process - a very messy one indeed. Not a process liked by the technocrats who like to define and measure predetermined progress.

The creative process begins with some kind of vision of the finished product but whatever eventuates might, or might not, resemble the original vision. This is the essence of creativity -being open to opportunities as they arise but aways keeping the end( more or less) in mind.

And it is this creativity that we need if we are to thrive In the future.

Currently we are heading in the wrong direction with the imposition of standardisation, the current surveillance culture, and an obsessive testing of what can be tested. Most schools are in an educational no mans land unsure in what direction they should take. In such confusing and ambiguous times it is time for mavericks to be valued. Or rather for mavericks to do what they do best!

Does your school benefit from the talents and energy of the 'maverick' or does it seek to restrain them?. The following is based on material written by Pat Heenan of the Centre for Leadership Excellence , Education Queensland 2000 that I found in my search for my article on the importance of the arts .

New Zealand was settled by courageous creative Polynesian and European adventurers prepared to risk all for success in an unknown world. Not for then complying to bureaucrats sitting at their desks or self interested populist politicians.

It was anthropologist Margaret Mead who said that every new idea was started by a small group of committed people. Or as Ralph Waldo Emerson wrote, 'Every reform was once a private opinion.'

Look around your school. Who are the teachers doing great stuff that seems different from what is expected?

They may be doing great things but they may not get on so well with their more conformist colleagues and team leaders. Such people may be genuine mavericks able to make a greater contribution if treated differently.

It was pioneer creative teacher Sylvia Ashton Warner who was believed to have said , 'you can tell the creative teacher he , or she, is the one lying dead in the corridor with an arrow in their back fired by one of their fellow teachers'.

Maybe the problem is with the team culture that has become so dominant in schools these days?

It does seem that the intent of such a team culture is for every staff member to be fashioned into 'good' team player leaving little room for individuality. As some schools say 'there is no I in team'. Under such conditions mavericks are forced to conform and the benefits of their thinking ignored. And to make things worse such mavericks can become subversive.

Patriarchal, or matriarchal, leadership combined with oppressive teamwork ( backed up endless testing) are powerful combinations. All very well if all involved have helped construct, or have bought into, the vision and values of the schools - values that ought to value individuality and creativity.

In such top down environments it is all but impossible for teachers to be really creative. Everything is based on improving the status quo.

As we enter what some are calling a 'Second Renaissance' , or 'Age of Ideas' such a conformist environment is counter-productive. The past will no longer prepare us for an unpredictable future. It seems schools really dislike change - or learning - forgetting that real learning, or change, is aways at first disruptive.

It seems we are frightened to take big steps even while we know things simply not working and current remedies simply compound the problem - National Standards come to mind.

We need schools to take a creative stance and to value new ideas, ideas that come from any source.As ideas emerge trying things out and then keeping what works. Tapping into creative individuals are the key.

The challenge is for school leadership, and for team structures, to work with the way mavericks think. A kind of liberation leadership; a concept that applies to team leaders and teachers alike.

Liberation leaders need to identify the people who can challenge the status quo and who are able to devise original and creative solutions. Such leadership can liberate such people to do their best work and for such people to still be accountable within the agreed beliefs of the school. Mavericks will work with leaders they respect and within values they believe in.

Unfortunately most organisations find it hard to absorb the ideas of mavericks.

Here are a few ideas to help:

Stop excessive team building ( which can morph into group think) and put the 'I' back into team. Teams work best with different points of view.

Start tapping into the exciting the idea of mavericks and stop forcing them to conform. Let them know they are a way ahead of their time!

Don't give the maverick too much freedom - encourage them to work within agreed boundaries however how liberal. Integrate their successful ideas into the school.

Protect your mavericks - let then know they are special. Reward them with more freedom. Start appointing/promoting people who demonstrate the characteristics of the maverick.

This is not an argument against teams - creative teamwork is vital. Nor is it an argument for rampant individualism. There is a need to fuse creative , often difficult, individuals with team requirements. It will always be a creative balancing act. Now and then individual will know better than teams! So don't overdo teams.

Stuffing mavericks into boxes will never work. It will stunt their creativity, develop them as potential wreckers, and schools will suffer for lack of their innovative ideas.

It is all a bit of a paradox.Capturing the talent, imagination,spirit and vitality of mavericks while at the same time still maximising the benefits of team building.
Leadership is the ultimate form of creativity at any level.
Posted by Bruce Hammonds at 2:20 pm

It is sure hard to be creative in the current survellience culture that most schools have in place - one dominated by making teachers conform to approved 'best practices' and through testing regimes. All very top down and team controlled.

Not much fun being creative these days.Risk taking is dangerous. Compliance is the name of the game -one most teachers and schools play well.

And yet we all know all innovation comes from creative individuals who have to fight to get their ideas accepted.

I'm with Mr/Ms Anonymous. Conformity, compliance, testing, more testing.... It's hard to buck the system without being seen as unco-operative and worse. I believe that teachers were much more effective when they were less accountable. They could go with the teaching moment, enjoy the kids, foster creativity.... Sigh....

You are right anon and Alison- all this accountability emphasis has created a no risk play it safe environment taking away the necessary leeway to allow creative endeavours. Schools are distracted by measuring a narrow range of achievements and still 20% students fail and will continue to do so. Failure is the result of such formulaic one size fits all teaching. Compliance kills creativity.

It is time for teachers to make stand but where are the maverick leaders? I only know of a few.

Principals these days are a wimpy lot busy doing the wrong things well!

Understood. I'm a cheerful self-confessed semi-academic maverick. Many ideas can be turned to institutional advantage - even without sacking the governing body ;)

The system is set-up to avoid producing mavericks. It seems today you must get "branded" by the school system with a diploma representing your conformity in order to move on to the next institution that will give you your next "brand."

By the way, interesting to see a NZ writer using a very nostalgic US term! I had to look it up...if I was to write a similar post using the NZ equivalent for maverick, it would have been entitled "Cleanskins - our only hope."

I am constantly pulling arrows out of my back.