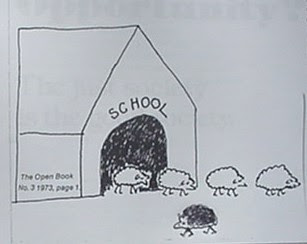 We need more black sheep leaders prepared to make their own tracks into the future not ones meekly following a standardized pathway.

Kelvin Smythe's last posting is too important to post only once so here it is again .

But first a few words:

It has aways been a concern of mine that over the past decades, for all the leadership courses, there seem to be so few true leaders prepared to stick their necks out. Plenty of compliant managers getting on with doing the wrong things right. A phrase that was used few years ago was that our schools have been 'over managed and under led' still holds true.

The trouble is leadership is something that arises due to a combination of timing, need and personal courage. In war time leaders arise like General Montgomery in the desert, Wingate in Malaya, and US General Patton. Ironically as soon as peacetime comes along such individuals are replaced by more conventional 'leaders'. Churchill, one of the great leaders was ignored until the Second World War started ( and dropped the election after!). Leaders lead by example and not by rule books. One of the greatest was Ernest Shackleton -an man of his word.

It was Patton who once said. 'If everybody is thinking alike then no one is thinking'.

Read Kelvins posting. It seems that we have a number of collaborators, or quislings, in our schools - 'Judas sheep' acting as 'posters' for others to follow.


One of the sad things about education controversies between governments and schools is the use and promotion by governments, for propaganda and ideological reinforcement, of poster schools and principals. Like all matters in education none are simple but, like most matters in education, they do become more comprehensible and realistic if, first, everyone accepts that nothing in education is simple, thereby accepting the valuing of difference and variety, and, second, looks to the wider context and accepts that what might seem relatively simple from a narrow perspective becomes much less so from a wider one.


Take, for instance, the poster principals for national standards. These principals, by definition, favour a solid regime of testing in literacy and numeracy. They also use such a regime as a driver of their schools, as a selling point in the education market, and as central to their philosophy. I’m not too struck on such a regime occupying such a place, but because I value difference and variety in education and the accompanying free interaction of ideas and philosophies, I say that should be their right.

Then along comes the government and says that such a solid regime in literacy and numeracy must be undertaken by all schools, and in the approved way.

At this stage, I would expect that a fair-minded principal of a school with the kind of testing regime referred to above, one with a feeling for social democratic ideals, an understanding of how education change best occurs, would say, such a regime suits my personality and philosophy, but I know it won’t suit all principals’ personalities or philosophies; neither is the uniformity or degree of government interference in the running of schools good for education; as a result, though I’m in favour of standards set by a solid regime of testing, I am adamantly opposed to national standards.

The important thing to note here is that some of the leading opponents of national standards do, indeed, undertake a solid testing regime in literacy and numeracy, though not to the extent of allowing it to define their schools or their curriculum. But what these principals recognise is that there is a world of difference between a systematic testing regime decided by schools for themselves, and a centrally devised, bureaucratically imposed, one imposed from the centre, with high stakes’ assessment an inevitable part of the mix.

Then there is the crucial wider context. Underlying the promotion of national standards is a destructive metaphor – the pyramid. The idea being that before children can reach the apex of being imaginative and creative in their learning they need to have spent years on building the base. In other words, children are put through years of routine, highly controlled learning before lively, challenging learning can occur. Why then should we be surprised that when children reach secondary school many of them have lost interest in learning; that they have become so accustomed to such controlled learning – that they reject any other kind.

A paradox about the current campaign for national standards, with its declared purpose of preparing children better for NCEA, is it will prepare children worse. The main reason a significant group of children, especially boys, fail to succeed at NCEA is not because of a lack of learning skills, but a lack of learning interest. They just don’t care a damn and haven’t cared for some time.

The wider context of learning, in relation to national standards, demands attention. I know the metaphor of a pyramid with the attention to the skills’ base is initially compelling, which is why it has been easy to sell to governments looking for simplistic answers in education, and for governments to sell to voters. I know I should propose here a contrasting metaphor but, while I can describe the contrasting teaching and learning process, I haven’t decided on a metaphor to fit, perhaps I will have by the end of this posting, perhaps a reader will make a suggestion.

There can be no question that imaginative and creative teaching and learning in schools is diminishing. If there is one thing all educationists agree on is that under a national standards’ regime the wider curriculum, and the richness of the curriculum, suffers. And it is suffering already in New Zealand schools: suffering from the time allocated; the quality of the wider curriculum programme; the sweeping away of the advisory support for the wider curriculum (ministry-based professional support is focused on ministry demands not children’s needs); and a marked sameness in the way schools function.

I am talking about reality and of direction.

Readers, I hope will give me leeway in my claims to some understanding in social studies (my feeling for approach, for instance), science (my writing of much of the Science Alive series, for instance), written language and drama (my writings and taking of courses), and my championing of the arts (for understanding and guidance, though, I rely on key ex-advisory people). As well, I still go into classrooms in an official and private capacity. To preface what I want to say in this manner is, I know, somewhat pathetic, but it is a measure of my desperation.

What is happening in these areas can be described as constituting a very low challenge to the imagination or encouragement to originality. The use of computers in social studies and science is disguising that what is happening is little more than old-style projects in a digital make-over. The following of the enquiry process is disguising that no genuine enquiry is occurring and little prospect of transformational learning. (See John Faire’s posting, ‘Report on e-learning programmes of enquiry’ in which he researched a number of schools.) Written language has become caught up with teaching progressions to objectives rather than holistic processes to criteria. Drama is virtually non-existent and art is being much undertaken but, in the absence of advisory stimulus, very much in a rut, a showy rut but nevertheless a rut.

Mathematics is in a somewhat different situation from the rest of the curriculum. The numeracy programme was more successful than the literacy one: partly because there was more ground to make up in numeracy, and partly because the programme used by the advisers was more holistic. The situation now with mathematics is that I go into schools and find that there are children raring to go, but bewildered (birds returning to a missing nest, a pub with no beer) because things have stalled. The stimulus from advisers to teachers to continue has been taken away to finance national standards with the ostensible purpose of improving national standards in numeracy. Put another way, money has been taken away from teaching and learning for the assessment of it at the expense of the teaching of what is to be assessed and the learning that results.

The key point I want to make is that imaginative and creative learning should not be made to wait, a la the pyramid base, until certain skills (often called ‘basic’ but I don’t use this term because it is pointing to the pyramid metaphor) have been learnt – but that the whole host of skills, attitudes, and understandings (far beyond those described as ‘basic) should be learnt together in a stimulating context – to the benefit of those certain skills but also to the benefit of those wider attitudes and understandings.

I make the challenge to any school that doesn’t believe that, can’t accept that – that I will come to your school and prove it in social studies.

So that’s my key point to poster schools and principals: by all means use what should be your right of choice – to run your school in any way you think appropriate, but be careful in the way your exercise your choice that it isn’t picked up by the government and used to help impose national standards, leading to an inevitable narrowing of the curriculum, a dismantling of a genuine and free-thinking advisory support, increased centralised control, and a reduction in genuine local control by schools. All the research evidence points to imagination and creativity coming from local initiatives exercised within a light regulatory framework. When I talk to Southland principals next month, it is the nature of just such a regulatory framework that we will be discussing. I will be reporting back via a posting just what they have to say. Meanwhile, poster schools and principals, tread carefully lest you tread on the dreams of others. I believe it is called professional ethics
Posted by Bruce Hammonds at 11:22 am

Too many belly button schools /principals to busy worrying about their own reputations to see the big picture.