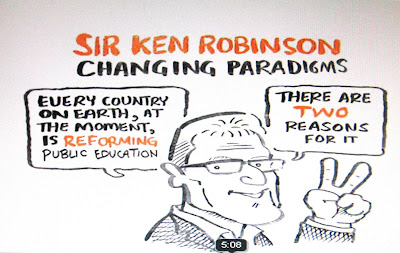 On the 26/27 of January I gave a keynote address to the 2011 Inspired Impact Conference organised by Ross Kennedy Principal of College Street Normal school Palmerston North. Over1400 educators attended.

The major draw-card was to be creativity expert Sir Ken Robinson but, at the last moment, Ross was informed Sir Ken could not attend due to Sir Ken having had a heart attack. After the shock Ross arranged for Sir Ken to appear as if live through satellite link up. It was, perhaps, better than real life as sir Ken was screened onto two large screens and was able to take questions from the floor.

Click on the video link to get an idea of Sir Ken's message. Admire the cartoon graphics that run as Sir Ken is talking. And, if you have time, take a look at others in the series particularly the one by Dan Pink.

Sir Ken's theme of developing a new creative education system was followed up by the other keynote speakers including myself -I am a huge Sir Ken fan.

"The present time is the most stimulating period in the history of the earth and our children are distracted by boring stuff. " [Sir Ken Robinson]

"We are alienating millions of our youth who see no purpose in going to school." [Sir Ken]

"We have to go in opposition to standardisation which is systematically destroying the capacity for cognitive development." [Sir Ken]


Why our current conservative government prefers to go back to the standardisation of a failing Industrial Age is beyond me.

Principals ought to share this link with all parents but, in particular, BOT members.
Posted by Bruce Hammonds at 3:07 am

I had an e-mail saying most schools had viewed Sir Ken's various videos - one principal three times! This may be the case. Actually you could throw in Art Costa, Guy Claxton and lots of others who do their best to encourage teachers to transform their clasrooms ( and principals their schools).

For all this inspiring expertise little changes. Words speak louder than action. The real educational 'gap' is the one between the fine rhetoric and reality.

Schools remain a conservative influence - the status quo rules supreme. The Governments Standards drag us back into the past. Teachers test but for little gain. Creativity is missing - except in odd classrooms. In some schools it rarely gets out of the art room. Personalisation remains just a fine word.Standardisation and conformity is the dull fare of most students; compliance for teachers!

We need the Sir Kens but nothing will change until groups of people have the courage to decide to make a difference. Isn't this the point that Margaret Mead made years ago.

I know of one such group and a few isolated teachers. We need the energy and excitement of the 60's again! Unless we do 'we can't get no satisafction'.

The view I expressed in my comment still holds true - too late now for principals to stand up. Now they will really be managers not leaders.