For a number of years the current National Government has been spreading the thought that one in five students are failing. The Prime Minister, prior to the last election, even went as far as to say that teachers are letting our children down.


The answer to this problem, the government believes, is sorting out teachers, by defining National Standards, and holding schools accountable to achieving them – by grading students into ‘above’, ‘at’ or ‘below’ the standards at the appropriate level. Assessing students against these standards however is problematic. Schools select a range of tests, including teacher objective judgements (OTJs), to ascertain levels of achievement. This is difficult particularly if used to compare schools from different socio-economic areas (called deciles) to demonstrate which schools are failing Even the Prime Minister has said that the standards are, to use his word, ‘shonky’.
Now the Minister is trying to impose an even more ‘shonky’ sets of tests called a Progress and Consistency Tool (PaCT). Intended to be made compulsory (enabling school comparison) it thankfully, for the meantime, is to be optional.
It all seems sensible to a public who haven’t had the information to consider the implications of such standards and testing. Recent statements by Nigel Latta and Lester Flockton and would be worth sharing with parents.  Also failing experiences of other countries using similar approaches – England, Australia and the US would be worth considering. In such countries schools have narrowed their curriculums to focus on the tested subjects (literacy and numeracy), in the process side-lining  other areas of the curriculum that many so called ‘failing’ students find success in. Probably the worst thing is that schools all but  ignore  developing the attitudes and dispositions required to thrive in an unpredictable and fast evolving future.
So Hekia is right to worry about the one In five failing but her methods are madness. Instead New Zealand needs to develop the gifts and talents of all students. As important as literacy and numeracy are they need to be seen as ‘foundation skills’ to enable students to develop their areas of personal interests. In this respect we need a personalised education system customising learning the needs of each learner not one that sorts, grades and standardises students.  Hekia's answer faces the past; schools, in contrast, need to face the demands of the future. Ironically the standards agenda is having the effect of side-lining the enlightened future oriented approach of the 2007 New Zealand Curriculum.
And Hekia (and neo –liberal politicians worldwide) is wrong to discount the effect of poverty on the achievements of her standards, believing that good teaching can make up any differences.  Evidently a breed of super teachers/schools can solve this problem – something no other country has achieved. And remember it is achievement measured only in literacy and numeracy – this brings us back to teaching to the tests. And also remember that New Zealand has traditionally scored well on international tests. And on top of this one of the highest scoring counties, Finland, achieves success without this obsession with testing and measuring!
The sad thing about all this is that primary schools are being forced into defensive mode ( this is where Hekia’s standards approach digs deepest) when the real area of disengagement of students is to be found in the13 to 15 year olds.
Primary schools need to see past the standards and believe that, if they were to present to their students opportunities to be creative, to identify and amplify the individual gifts students bring with them to their classes (or in some cases to set about helping their students rediscover talents ignored by previous teachers), their students would do well on any standards.
‘Failing’ students suffer more from an ‘opportunity gap’ than an ‘achievement gap’.
New Zealand has always had creative teachers to gain inspiration and courage from. It is to these people, past and present, that provide the real solution to Hekia’s one in five failing. The real experts in  developing such a creative system are innovative teachers. Such teachers  need to be identified and their expertise shared between schools.
Unfortunately most schools  are pressurized to implement practices that favour Hekia’s solution. Literacy and numeracy take up a lions share of available time, all too often detached from class and group inquiry topics. Pre-planned formulaic ‘best practices’ such as assessment criteria develop student conformity. In contrast creative classrooms integrate such areas in the service of achieving in depth inquiry studies focusing on individual children’s skills and understandings.
Along with this formulaic 'best practice'  emphasis the use of ability grouping (even setting across classes) in such areas  creates endemic school failure.  Ability grouping is an approach that suits teachers rather than learners (except those students in the higher groups). There are a number of research references describing the counterproductive effects of such grouping. Mathematician Jo Boaler is highly critical of ability grouping which has the power to turn students off maths for life. Three groups, it seems, do not fit all - once a weka ( a flightless bird) always a weka!


This is not to discount the idea that students come to any learning with a range of abilities – but that differences are more about lack of opportunity  rather than something innate. In any learning experience there will always be students (even small groups) in need of special help to learn the 'hard bits' but once this help is given then students should return to game of real learning. This approach is well described by David Perkins in his book ‘Making Learning Whole’. Successful countries like Japan, Korea and Finland also  manage to succeed without recourse to ability grouping.

The key to success without crude ability grouping is to develop in all students a ‘can do mind-set’; a belief that with effort and practice  all can achieve. 'Learning power', according to Guy Claxton in his book ‘What’s the Point of School’, is what is required.

The importance of perseverance (often called grit) is the key to any successful creative individual. Such ideas are well described by Daniel Pink and Carol Dweck.

Any if anyone needs information on how to develop students’ gifts and talents then Sir Ken Robinson’s ideas are worth exploring. Check this list of books for further ideas.


So Hekia is right about too many students failing but wrong in her solution – and wrong in discounting the demeaning effects of poverty.
And schools are equally wrong to follow  her advice.
And primary schools are wrong if they continue with the status quo to implement ability grouping, streaming, or setting. 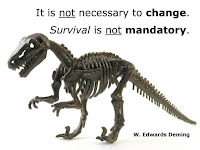 And most secondary schools, with their antiquated, authoritarian, hierarchical  and industrial age settings are simply wrong – too academic, too fragmented, too streamed, to cater but for what they see as successful learners. Jane Gilbert in her book ‘The Knowledge Wave’ makes this very clear as does David Hood in his book ‘Our Secondary Schools Don’t Work Anymore’.
So Hekia is wrong – but so  it seems are schools.
New thinkingrequired.
Business philosopher Peter Drucker has written that the first country to develop a 21stC education system will win the future. It won’t be with Hekia in charge and with schools too concerned with the present to notice the damage they are doing implementing the wrong solutions.

Tomorrow is a moving target we need new minds to ride the knowledge wave.
We need some real Tomorrows Schools!
Posted by Bruce Hammonds at 4:56 pm

Great stuff Bruce - you are right to identify the negative effects of ability grouping. Such grouping has its genesis in the industrial age setting schools were developed in.

Thanks Anon.
Now that I am only a spectator these days I am trying to see education as a total experience and am noticing how it is anything but a fair system for all students. And I can see how much it is influenced by market forces technocratic/audit political ideology and restricted by the unquestioning of the status quo ( the continuing use of ability grouping and a Victorian obsession with testing the three Rs).
I wonder why all the great educational thinkers are ignored by those who control education including far too many principals. I have been told by principal friends I don't appreciate what it is like to manage( I hesitate to say lead) in schools these days. For me I see principals who are trapped in a present cage unwilling to try flying out - even if the cage door is open!

My feeling is that principals anywhere are always preoccupied ensuring their school is well regarded by their parent body making real changes difficult. Somehow there has to be national conversation to develop a new narrative for education to give the wider community and educators a new sense of direction to work towards. Critical 'spectators' , such as yourself, are a good beginning to start the ball rolling.