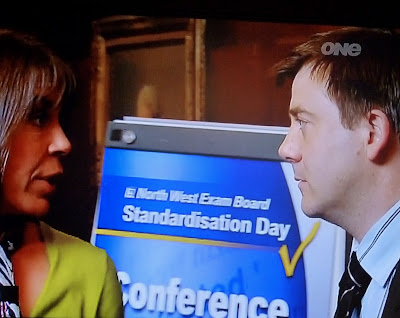 A scene from Coronation Street.Teachers attending a 'Standardisation Day'!!

A combination of a Market Forces ideology and the powerful role of educational technocrats are pushing ahead worldwide with their agenda to provide parents with data ( 'League Tables') to give parents choice  with no understanding of the consequences of destroying diversity, creativity and innovation that such a narrowing of the curriculum involves. Education in the 21stC  is reduced to a reactionary 'Victorian '  emphasis on literacy and numeracy.

This is ironic as the future success of an innovative country requires the school system to develop the divers talents and gifts of all students.

This American article points to the fulfillment of the technocratic dream.


' A new Federal Grant  will expand North Carolina's  digital recording of student academic histories beginning in infancy for some children.

About 49 million of the $70 million 'Race to the Top' grant the Education Department awarded North Carolina will be used to expand to track the progress of younger children.Tracking already is done in a 2-year old database covering more than 1.5 children between kindergarten and 12th grade.

Teachers are also recorded with unique identification number so their performance can be tracked.

State education officials have applied for a $4 million grant that would increase the ability to track students performance into their university or community college careers an even fellow students when they enter the workforce after leaving school.

Tracking  student learning from early years to graduation and beyond is a part of a national trend towards shaping efficient and effective schools based on "good data' instead of anecdotes and feelings and political decisions" said Adam Levitson the State Education official in charge of 'Race to the Top' grant programmes.

North Carolina is one of the half dozen states that share teacher information performance data based on student achievement, with the institutions from which they graduated.

I would suggest the 'officials' make study of Mc Donald's for models of the standardisation agenda or the work of Joseph Stalin's officials in the Soviet Union of the 1930s. Or Adolf Hitler!! No point in reinventing wheels.
Posted by Bruce Hammonds at 10:40 am

Teachers will finally wake up to realize life will be a nightmare of survelliance in the future. Well, you and Kelvin, and others, did your best.

Seems incredible to me that the government is intent on imposing a reform agenda that has failed in the two countries that have implemented it - the UK and the US; countries New Zealand is far ahead on in International PISA testing.

Who would want to be a teacher in such a repressive environment. Not enough principals with balls it seems to me!

Principals have had their heads in the sand for years - easy targets to get run over.

My discussions with principals show them to more concerned with their own school's reputation than worrying about bigger issues. How the school did on ERO is number one. I see it as getting a car a WOF - not much more.

Mind you principals were never the real source of innovation - only creative teachers are.Principals however create the conditions and thus can make or make or break the spirit of creativity.

As always really creative teachers ( as with creativity in any field) are not that common.

Boy oh boy, this is very scary indeed. maybe I should be tending my resignation now!
Bruce, how do you think a creative teacher can survive in such a climate?

Hi Struan. I still believe creative teachers will survive because their students will have the right 'have a go' attitude. And the changed climate will sort out those who were on the 'bandwagon' - this will make really creative people stand out. Not even the meanest person can ignore a stimulating creative classroom full of engaged kids. Certainly parents love a creative classroom - one where their kids do work that really surprises them.

I think creative teachers ought to link up with like minds in their school and if no one around network between schools - even talking with one other is enough.

This is what we did in the early days.

Creativity is impossible to suppress forever!