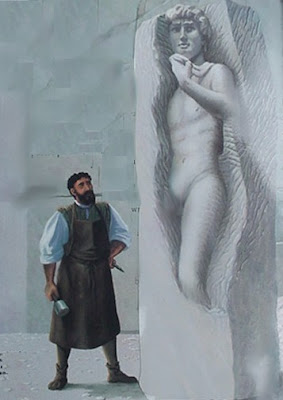 Michelangelo was believed to have said : I saw an angel within the marble and went about to set it free'. Teachers need to have this 'David factor'.

We are leaving the Industrial Age and entering an Age of Ideas and Creativity ; an age where individual and shared talent will be the most important assets. Schools, as Tom Peters says, in his wonderful book 'Re-Imagine': 'Are a thinly disguised conspiracy to quash creativity'. 'Talent', he says, 'is everything. And the production of talent is significantly dependent on schools'. Or it ought to be.

'I believe I experience creativity at every moment of my life.' Henri Bergson

'Not one shred of evidence supports the notion that life is serious.' Anon

'Life is creative. It makes it up as it goes along.' Margaret Wheatley and Kellner-Rogers Authors 'A Simpler Way'

'Creativity may have killed a few cats, but evolution certainly eliminated many more incurious ones.' Guy Claxton in 'Wise Up'

'Life is to be lived. If you have to support yourself you bloody well better find a way that is going to be interesting.' Katherine Hepburn

'To find a form that accommodates the mess, that is the task of the artist today.' Samuel Beckett

'Be a judge of children's creativity - but not too good a judge!' Elwyn S Richardson NZ Pioneer Educator Author 'In the Early World'

Life is not neat, parsimonious, nor elegant. Life seeks order in a disorderly way.' Margaret Wheatley and Kellner Rogers

'To live a creative life we must lose our fear of being wrong.' Joseph Chillons Pearce

'Orville Wright did not have a pilots license: don't be afraid to bend, or break the rules'. Richard Tait Grand Pooh Bah , Cranium.

'Professionals built the Titanic - an amateur built the Ark.' Anon

'Although prepared for martyrdom, I prefer it to be postponed.' Winston Churchill

'When Michelangelo looked at the block of marble he was to carve he looked beyond the outside and saw the shape of the statue he was about to create. He could see the real beauty hidden within... ' Valerie Stewart, 'The David Factor'.

'The human imagination... has great difficulty in living within the confines of a materialist practice or philosophy. It dreams like a dog in it's basket, of hares in the open.' John Berger Art Critic

'To invent something you have to be removed from the world. In order to have liberty to imagine something better, you need to step outside for a while.' Bruce Mau Designer

'There is no hope for any speculation that does not look absurd at first glance.' Niels Bohr Physicist.

'Most of the rules in society tend to restrict creativity to a safe level.' Sting (Musician)

'...the artist treats intuition and nuance with respect and reminds us that a little madness resides in all of us. Artists give voice to feelings, to conflict, to the prism of human experience,' Peter Block, Business Philosopher.

'Creativity is born of chaos, even if it is somewhat difficult to glimpse the possibilities in the midst of the confusion' Charles Handy

'You have to stand outside the box to see how the box can be re-designed.' Charles Handy

'All truth passes through three stages. First it is ridiculed. Second it is opposed. Third it is accepted as being self evident.' Arthur Schopenhauer

'If a man does not keep pace with his companions, perhaps it is because he hears a different drummer.' Thoreau

'Don't worry about people stealing your ideas/If your ideas are any good, you'll have to ram them down people's throats.' Howard Aitken

I don't give a damn for any man who can spell a word only one way..' Mark Twain

'..centres of creativity tend to at the intersections of different cultures, where beliefs, lifestyles and knowledge mingle and allow individuals to see new combinations of ideas with greater ease.' Mihaly Czikszentmihaly

'The uncreative mind can spot wrong answers, but it takes a creative mind to spot a wrong question.' Anthony Jay

'Why not go out on a limb? Isn't that where the fruit is?' Frank Scully

'innovators are seldom easy to be around. The most creative members of an organization can be irascible, annoying, touchy, intolerant, prickly, self aggrandizing. Their lack of tact offends coworkers. It also makes them willing to speak up when other hold their tongues. What comes out of their mouths is often quite valuable, if not always easy to hear.' Farson and Keyes, 'Whoever Makes the most Mistakes Wins.'

'If we learn to domesticate creativity- that is enhance it rather than deny it in our culture- we can increases the number of creative persons... as it was in the Renaissance, Elizabethan England, when civilization made great leaps forward.' John Gowan Educator.

'The creative person is overpowered, captive of and driven by a demon... They become our legendary heroes.' Carl Jung

'One of the marks of having a gift is to have the courage to use it.' Katherine Anne Porter US Novelist

'Human life itself may almost be pure chaos, but the work of the artist is to take these handfuls of confusion and disparate things that seem to be irreconcilable and put them together in a form to give them some kind of shape and meaning.' Katherine Anne Porter US Novelist
Posted by Bruce Hammonds at 11:19 am

Hi,
your post "Educational Quotes 7: Creativity" is very special for us. I have collected many quotes from you and posted my blog. I will come back soon. So thanks a lot for doing this job. http://www.quoteschart.com/Creativity-quotes/