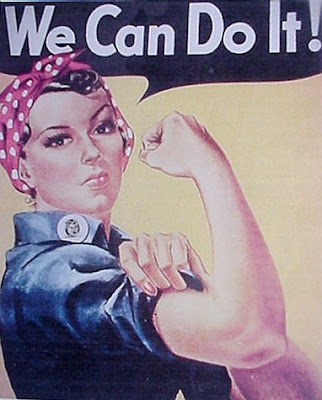 'Rosy the Riviter' - a USA poster from WW2 to encourage woman into the workforce. When the GIs came home woman had changed their minds about their role in a modern society.

In reality 'learning' and 'change' are synonymous. Change is not an issue if it makes sense to and is 'owned' by those involved, rather than being arbitrarily imposed. An appreciation that change is a continual process, involving confusion and difficulty, is vital for future learners. 'It is not change that kills it is the transitions'

'Change is like dancing with a gorilla you can't stop because you're tired'. Anon

'Men are not afraid of things but of how they view them.' Epictetus

Every change process that I've seen that was sustained and spread started small.'
Fast Company

'There can be little doubt that. an untapped source of human intelligence and creativity is found among the vast number of individuals in the lower socio-economic levels...the bi- products of this waste are evident.. in unemployment ...in rising crime, delinquency rates, and most important in human despair.' Renzulli

'Route and destination must be discovered through the journey if you wish to travel to new lands... the key to success lies in the creative activity of making new maps.' Stacy

'The times are a-changing and if we don't we will sink like a stone.'Bob Dylan

Lucy: 'Charlie Brown on the cruise ship of life which way is your deck chair facing?' Charlie Brown ponders and replies, 'I don't know, I've never been able to get one open'. Schultz

'Too much educational reform and restructuring is destroying teachers confidence, draining their energy, eating up their time and taking away their hope.' Fullan and Hargreaves

'Schools are among the very few institutions that have remained almost entirely unchanged for most of this century.' Judith Aitken 99

No other organisation institution faces challenges as radical as those that will transform the school'. Peter Drucker

'We need to help the majority unlearn what has been learnt and then help them learn what needs to unfold. Futurists believe that educational and community leaders must be 'disorientated' before they are orientated. That they must unlearn to learn.' Anon

'Every organisation has to prepare for the abandonment of every thing it does. Be prepared to abandon everything, lest we have to abandon the ship.Peter Drucker

'Half a revolution is worse than none.' Anon

' Teachers have been virtually shell shocked by barrages of 'semi- changes' that sap the energy while making few substantial differences - and the sounds of imminent changes are almost deafening.' Joyce and Showers

Between the idea and the reality, Between the notion and the act Falls the shadow'. T S Eliot

'The crew of the caravel Nina also saw the signs of land and a small branch covered with berries. Everyone breathed afresh and rejoiced at these signs.' Christopher Columbus

'The starting point for strategic planning is not the present but the future - a vision of where you want to be.... It is essential too that the vision is based on the guiding philosophy, core beliefs, and purpose of the organisation', ERO Report 95

'This bridge will take you halfway there- the last few steps you will have to take yourself.'  Shel Siverstein

'Rarely do outside of school remedies work their way into the fabric of the schools or into the teachers lives, and more rarely into the classrooms. Therefore they only offer a modest hope of influencing the basic culture of the school' Roland Barth

'The best we educational planners can do is to create the conditions for teachers and students to flourish and get out of their way.' Theodore Sizer

'Be in charge of your own destiny or some one else will.' Jack Welch CEO

'All life is an experiment.' Oliver Wendell Holmes

'Life is the path you beat while you walk it.' Antonio Machado/Poet

'It takes more than one person to make a path.' African saying

'School should be the best party in town.' Peter Kline

To much emphasis has been placed on reforming school from the outside through policies and mandates. Too little has been paid to how schools can be shaped from within.' Roland Barth

'What is worth fighting for out there is ultimately about developing life lines of hope ...for all those desperately seeking a way forward.' Fullan and Hargreaves

'Some people think you are strong when you hold on. Others think it is when you let go'. Sylvia Robinson

'Too many decisions about changes are made by people untouched by the change process.' Peter Block, Business philosopher.

'How many times have we brought in an outsider to tell us what we already knew .' Peter Block

'Why follow the steps of another to find out where our dreams will lead us.' Peter Block

'To see the future you have to travel on the rough edge of experience.' Harriet Rubin Fast Company writer

'Things do not change; we change.' Thoreau

'To the blind all things are sudden.' Old saying.

'Coming, ready or not!' Childhood game

'What worked yesterday is the gilded cage of tomorrow.' Peter Block Business, Philosopher Author of 'The Answer to No is Yes'

'You can plan events, but if they go according to plan they are not events.' John Berger Art Critic

'You can't jump a chasm in two bounds.' Chinese saying

'As the prostitute said, 'It's not the job it's the stairs.' Anon

'To travel hopefully is better than to arrive.' R L Stevenson

'In a world of infinite choice people are struggling to figure out what to do.' Ralph Waldo Emerson

'Nothing was ever achieved without enthusiasm.' Ralph Waldo Emerson

'If a torrent sweeps a man against a boulder, you must expect him to scream, and you need not be surprised if the scream is sometimes a new theory.' R L Stevenson

'The price of change is measured by our will and courage, our persistence, in the face of difficulty.' Peter Block Business Philosopher

'If you believe that saying no will get you shot, well, what a fine way to go.' Peter Block

'You must be the change you want to see in the world. If blood is to be spilled to do it. Let it be our own.'. Mahatma Gandhi

'It is not necessary to change. Survival is not mandatory.' W Edward Deming

'If life is like a stage I want better lighting.' Anon

'It is our belief that schools in the main are entering the twenty-first century with structures and more importantly, underlying assumptions which are nineteenth century in origins, or relating to the world of the 1950 or 1960s.' Bowring -Carr and Burnham West UK Educators

'To cope with a challenging world, any entity must develop the capacity of shifting and changing - of developing new skills and attitudes; in short the capacity of learning.' A De Guess: 'The Living Company'.

'You cannot carry out fundamental changes without a certain amount of madness. In any case it comes from non - conformity, the courage to turn your back on the old formulas, the courage to invent the future. It took madmen of yesterday for us to be able to act with extreme clarity today. I want to be one of those madmen.' Thomas Sankarra African Congress.

In schools the main problem is not the absence of innovations but the presence of too many disconnected... piecemeal, superficially adorned projects... We are over our heads'. Fullan 2001

'Every change you see hides something else we want to do.' Rene Magritte ( Artist)

'Nothing evades our attention as persistently as that which we take for granted... the decades roll on without even a suggestion that perhaps the whole matter must be rethought' Marion Brady US Educator

'You can't force commitment, what you can do... You nudge a little here, inspire a little there, and provide a role model. Your primary influence is the environment you create.' Peter Senge

'It doesn't happen all at once. You become. It takes a long time'. Margery Williams

'Life is like playing a violin in public and learning the instrument as one goes along.' Samuel Butler

'Life is like a box of chocolates. You never know what you are going to get.' Forest Gump's Mother

'We are like eggs at present. And you cannot go on indefinitely being just an ordinary egg. We must hatch or go bad.' C S Lewis

'Passion mutates into procedures, into rules and roles. Instead of purpose, we focus on policies. Instead of being free to create, we impose constraints that squeeze the life out of us.' Margaret Wheatley and Kellner Rogers

'The future cannot be determined. It can only be experienced as it occurring. Life doesn't know what it will be until it notices what it has become.' Margaret Wheatley and Kellner - Rogers

'Age is a high price to pay for maturity.' Anon

'In order to transform schools successfully, educators need to navigate the difficult space between letting go of old patterns and grabbing on to new ones.' Deal 1990

'There is no risk less way to the future, we must choose which set of risks we wish to run.' Jay Ogilvy

'I have a feeling we are not in Kansas anymore.' Dorothy/ Wizard of Oz

'Men are asleep, they must die before they awake.' The Koran

'Custom lies on us heavy as frost'. William Wordsworth

'It takes less energy to be free and flowing than locked up in stress ... we learn by releasing and letting go, not by adding on.' William Bates Editor

'The road is better than the inn.' Cervantes

'The goal of strategic planning is to produce a stream of wise decisions... it also accepts the possibility that the final product may not resemble what was initially intended'. Patterson, Purkey and Parker

'Evolution is the most popular way we have for dealing with change.' Seth Godin Business Philosopher

'Evolution favors the survival of the wisest.' Jonas Salk

'It is necessary; therefore it is possible.' C A Borghese

'Plan to be better tomorrow than today, but don't plan to be finished'. Carol Ann Tomlinson US Educator

'Crossing this river is difficult: it means leaving behind some of your own ideas' Dick Raymond

'When you start to abandoning your old beliefs or values... you may be stuck at the threshold for two or three years. Before moving on, you have to clear away your cherished beliefs.' Dick Raymond

'Start with the spirit of the rule- bending it to shape best practice. If the system tightens up, go to the letter of the rule and efficiently do what is necessary with as little energy as possible in a way that minimizes impact.' Keith Goldhammer Author. 'Characteristics of successful Principals.

'If a things not worth doing do it badly and get on with the important things.' Bruce Hammonds ( adapted from G K Chesterton)

'Sometimes a thing worth doing is worth overdoing'. David Letterman TV Host
Posted by Bruce Hammonds at 1:11 pm

I am loving your quotes Bruce.

nice piece of information, I had come to know about your internet site from my friend vijaya, delhi,i have read atleast 12 posts of yours by now, and let me tell you, your website gives the best and the most interesting information. This is just the kind of information that i had been looking for, i'm already your rss reader now and i would regularly watch out for the new post, once again hats off to you! Thanx a ton once again, Regards, Inspirational Quotes by Mahatma Gandhi

Here is nice quotes. thanks for sharing this kind of quotes.