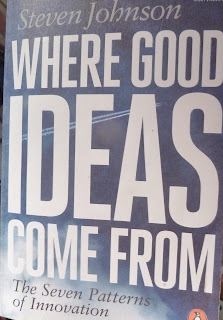 I have really enjoyed this book that I picked up at Heathrow Airport last year - Johnson's book has a message for countries, organisations and schools if they want to develop creativity. Johnson’s book outlines the seven patterns of innovation from the Renaissance to satellites

The argument of his book that there are a series of shared purposes and patterns that recur again and again in unusually fertile environments. Johnson has distilled them down to seven patterns.

If organisations were to adapt them the better they would be in tapping extraordinary capacity for innovative thinking. Interestingly Johnson has discovered that these patterns also occur in the natural world. Johnson writes about the similar creativity of coral reefs and cities. Why are coral reefs and cities such fertile environments for creativity? Innovation, the book illustrates, depend on openness and collaboration as much as competition (‘survival of the fittest’) contrary to popular political beliefs.

If organisations such as schools and classrooms embraced the patterns Johnson has uncovered they would do better at nurturing new ideas. Johnson writes that we are better by connecting ideas than building walls around them – good ideas want to be free, they want to connect, fuse, recombine.

The Seven Patterns of Innovation

1 The adjacent possible –each new innovation opening up new ideas to explore.

New ideas are built out of existing ideas – perhaps the best example is Gutenberg developing his printing press borrowing ideas from wine presses. Schools need to encourage teachers (and teachers in turn with their students) to explore and extend ideas of others.

2 Liquid networks – to develop ideas you need lots of ideas to connect to ideas you already have in your brain.

In such a randomizing environment ideas collide with each other. Innovative systems have a tendency to gravitate towards the edge of chaos – too much order and they are squelched.  Good ideas flow from mind to mind. This was seen during the flowering of the Renaissance and in Silicon Valley. Individuals get smarter if they are in ideas rich environments.  Most brilliant ideas have messy beginnings and the best environments are where people can meet and share ideas – in early days coffee shops – a balance between order and chaos.

3 The slow hunch- most ideas Johnson found come into the world ‘half baked’.

Ideas start with vague hunches – problems that haven’t yet been proposed. Ideas sometimes take years to be realized – at this point the conclusion my come in a flash- the eureka or light bulb moment. Contrary to popular thought ideas take time to develop – Darwin finally understanding the theory of evolution is a point in case. Highly pressurized environments ideas are destructive to the development of such thinking – there is just no time to pick up on hunches.

4 Serendipity –the power of accidental connections.

Serendipity is made up of happy accidents that completes hunch or opens up a new adjacent possible. Such ideas fill in gaps in the puzzle. The challenge is to develop ideas that foster these serendipitous connections. Serendipitous moments often happen at the oddest moment –while out on a walk or reading a book. Organisations such as Google are experimenting developing ideas to develop such serendipity to give good ideas opportunities to connect.

The history of being spectacularly wrong is the key to innovation. Flemming discovered penicillin by accident but he was up to taking advantage of it – to learn through error. ‘Fertility of imagination and abundance of guesses at truth are the first requisites of discovery.’ ‘Error often creates a path that leads you out of comfortable assumptions’. ‘Being right keeps you in place. Being wrong forces you to explore’. ‘The trouble with error is that we have a natural tendency to dismiss it Evolution of species and ideas are developed through errors –or mutations. Being correct locks us into non thinking. The future is about failing faster – or ‘failing forward’ as car designer Honda once said.’

Once again Gutenberg modifying wine presses comes to mind.  Gutenberg was not interested in wine – he was interested in words but he borrowed an idea from another older technology.  The history of innovation abounds with exaptation including the World Wide Web – a sort of mental cross fertilisation.  Some organisations are ripe for exaptation. As mentioned places like coffee houses in early times –  places where people with diverse interests and expertise can meet and share. Chance favours the connected mind.

A coral reef provides a platform, or habitat, for a diversity of life to evolve.  Beavers build dams which are platforms for a range of plants and animals. is an exercise in intelligent behaviour.   Platforms open doors to the adjacent possible. The development of GPS provided a platform for all sorts of inventions.
What is required are environment that encourage people to think broadly and generally about task problems, ones which, if it were a school, where kids feel free to follow their curiosity – an environments that encourages interaction with others with expertise in other areas.

The World Wide Web is a most impressive platform.   The web is an ecosystem for ideas to emerge. Facebook and twitter are platforms. In an open platform ideas can come from anywhere.  Connecting with other platforms provides an ideas advantage.  Good ideas more often lie outside platforms.  Ideas emerge best when you don’t have to ask permission.

Johnson concludes his book by describing the kind of environments that have produced the best ideas. One thing is certain ideas do not arise from a competitive efficient market environment. The best ideas are a connected affair. The best ideas arise in decentralised environments that provide powerful opportunities to develop slow hunches, serendipity, exaptation, cross- fertilisation and emergent platforms.
In tightly controlled environments ideas are restrained or suffocated – cross fertilisation cannot occur if there are sentries by the door! The best platforms share ideas.  The internet allows ideas to flow and connect in serendipitous ways Today it is hard to stop new ideas.

It wouldseem to me that schools as they are presently structured are not ideal todevelop creative ideas – almost the opposite. The best learning environmentslie in the space between chaos and order; in collaborative and connected andoften unpredictable environments.

Schools need to consider what needs to change to cultivate and promote good ideas and how to link with ideas from other schools or any place.  Ideas need to collide, emerge, and recombine.

Schools need to be more like coral reefs not compartmentalized,walled off silos, by age, ability or subject areas.

Schools are not the best places to develop good ideas. They are not the learning organisations they claim to be.

Tthe book certainly seems to have grabbed your attention Bruce. And it obvious that schools, with their formulaic and presribed teaching, and with their narrow focus on measuring student achievement in literacy and numeracy have very little to do with creativity. Creativiry cannot exist in a conforming compliance environment based on accountability above opportunity.

Schools have lost the plot!

Innovation/creativity in schools only really is developed by individual teachers working in positive cultures that allow them to tap into the wisdom of others. 'Top down' reforms never work as intended.

As a reault both teachers and students can't take advantage of the 'adjacent possible'.

Schools are to top down controled to allow flow of ideas and 'squelch' individual teacher creativity.

The current emphasis on: pre-planning of teaching, intentional teaching, resrictive success criteria,and a focus on 'best practice' literacy and numeracy programmes is anti the 'slow hunch' - or developmental or messy growth of students' ideas.

All the above are not condusive to 'serendipity'.

Although the role of error is understood(miscues in reading)the many formulaic 'best practices' mentioned above result in clone like learning - even in art.

As for 'borrowing' from other teachers school structures make this difficult- worse in streamed subject secondary schools.

As a result of all the above schools are not ideal 'platforms', or cultures, for the development of creative ideas. Quite the opposite.

Finally the moves towards imposing National Standards and League Tables will create a competitive winner/losers 'survival of the fitest' mentality that will push out collaboration and sharing that Johnson says is so important for the 'development of good ideas'.

Bruce, this is an excellent post. This books sounds very detailed and you have done a great job of summarizing.

Axelrod and Cohen, in their book Harnessing Complexity, suggested innovation would occur in distant archipelagos and semi-isolated mountain valleys. That metaphor is very similar to that of the fertile coral reef.

I love your suggestion about where innovation and creativity can be located in schools with individual teachers and true collaboration. It is the anti-creativity stance of rigid bureaucracies that seem most entrenched.

I wonder if educators will read this and get it-both the book and your blog?

Hi 'transformer'. The book has great message for all organisations that want to transform themselves.

Top down bureaucrats kill everything!

Actually Johnson believes in density ( crowded cities and coral reefs) are required to allow his 7 patterns to work.

I still think that new ideas come from the edge ( as your book says). Johnson believes diverse cities and coral reefs provide all sorts of edgy places.

Distant creatives still need to connect - through the web today? The web is one of Johnson's examples of a platform.'

I guess some educators read my blog - all a bit serendipitous.

I wonder if there are any truly creative schools?

Thanks for sharing the wisdom of this book! Amazing...