I have to admit being somewhat disillusioned by the lack of leadership of those who profess to lead the education profession.
Perhaps I expect too much?
At best educational spokespeople talk and write about the negative effects of National Standards as if schools were to be left alone the status quo would be ok. To the public such a negative position sounds like teachers can’t face up to accountability. By defending the status quo teachers are missing an opportunity to contribute to new agenda for educational change – one facing the challenges of the future than either defending the past or the current government standardisation agenda.One Taranaki principal has had enough and has spoken out!

And it seems I am not alone about the lack of leadership - read the latest from Kelvin Smythe
﻿
Ironically, if educationalists were to stand up they already have the ideal supporting document – the, all but side-lined, 2007 New Zealand Curriculum. To do this would means breaking out of compliance mode which sees schools focussing on looking after their own self-interest.
Such action will only happen if schools work together. As Voltaire said ‘it’s hard to be right when the government is wrong’ 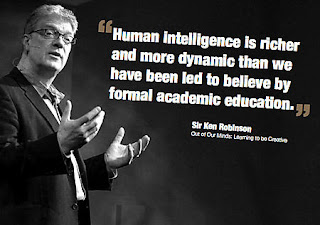 One writer school leaders could get behind to give supportis Sir Ken Robinson who is well known to many schools. And there are many others. It is also ironic that while Western countries follow neo liberal ideology leading to testing, standardisation and privatisation Asian counties are working hard to break out of high stake testing and introduce more creativity into their systems!

Listen to Sir Ken's TED Talk if nothing else!
If you like pictures with his talk this is great ( and shorter)
Sir Ken Robinson recently wrote an article outlining his educational transformational thoughts. It was written with America in mind but his thoughts apply as much to New Zealand.
‘One of the biggest challenges’ writes Sir Ken, ’is sorting out American education.’’ Education’, he writes, ‘is probably not on the top of politicians to do list but it must be soon. Transforming education has to be at the root of everything the new administration hopes to achieve’.
This applies equally to New Zealand.
What is required is a ‘passionate vision of social equality and personal possibility, of economic responsibility and cultural respect’ – a vision that relates to the dream of Martin Luther King. ‘Realising this dream means thinking in radically different ways about ourselves and our children, about our relationships with the earth’.
‘All of this is the work of education. Not the sort of education we have now. The present system was designed for 19th century industrialisation and it is overheating in a dangerous way. Reforming education isn’t enough. The real task is transformation…… systems of education that live and breathe the 21st century. This is a large task and it can’ be put off.’
While we have National Standards America has No Child Left Behind testing in a narrow range of similar areas. ‘Whoever thought of this title clearly gets irony. The fact is this legislation is actually leaving millions of children behind’. The same scenario will result from National Standards for those are found below standard.
‘The premise of NCLB is deeply flawed. It is based on the fatal idea that to face the future schools have to do better at what they did in the past; they simply have to get back to basics and raise standards. Schools….should get back to basics.’ ‘But what are the basics now, and which standards should apply?’
Sir Ken outlines the flaws of NCLB that apply equally to National Standards. Firstly they promote a narrow idea of intelligence and ability. The result is a terrible waste talent and motivation for children whose abilities lie in other areas. ‘The result is that schools will become dreary and homogenised.’ And third, it assumes ‘that education can be improved without professional creativity and personal passions of teachers. The result is that many good teachers are streaming out of the very schools that urgently need them to stay.’
‘To face the future, America (and New Zealand) needs to celebrate and develop the diverse talents ofall its people- young and old alike. It needs to cultivate creativity and innovation……these are the real basics. Basic…is a different view of human talent and ability, and of the conditions in which people flourish’.
This ought to be the challenge for school leaders in New Zealand not meekly complying with what many must feel is wrong!
Sir Ken writes, ‘I’m always struck by how many adults who have no idea what their real talents are, or whether they have any at all. Many people just do what they do with no particular passion or commitment to it. I know others who genuinely love what they do; who would probably do it for free if they had to, and can’t imagine doing anything else. Understanding what makes a difference is essential for transforming education, business, and communities to meet the real challenges of the twenty-first century.’ 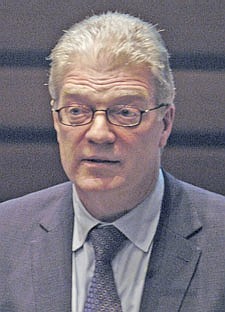 ‘I’ve lost track of the numbers of brilliant people I’ve met, in all fields, who didn’t do well at school. Some did of course, but others only really succeeded, and found their real talents in the process, once they’d recovered from their education. This is largely because the current systems of public education were never designed to develop everyone’s talents. They were intended to promote certain types of abilities in the interest of the industrial economies they served.’
School leaders who have chosen to comply when at heart they know what they are being asked to do is wrong is worrying but I also appreciate standing up against   un-educational practices is difficult. And this is even more difficult when the general public have not been given a true alternative and all they hear is ‘we don’t want National Standards’.
Sir Ken (and many others) has outlined an alternative scenario based on developing the talents of all for school leaders to articulate and put into practice.
So far I see no evidence of such an alternative being expressed.
Sir Ken concludes by saying that we have to face up to a very different world, one in which creativity and innovation will be required. Our success will depend, he writes, ‘on the diversity and creativity of all its people.’
‘The wholesale transformation of education is at the heart of the changes that are needed.’
Be great if school leaders had the courage to lead such a transformation.
I’m not holding my breathe!
Posted by Bruce Hammonds at 10:52 am

Few principals have not listened to Sir Ken but few of them are willing to put his ideas into practice. How do you see a creative school?

Knowing what is right and doing it are two different things. A while ago I wrote a post about what a creative school might look like and I have plans to write snother soon - next week!

Real creativity is in short supply - plenty of good formulaic work that fits into prescribed success criteria but hardly creative by definition as such work lacks originality.