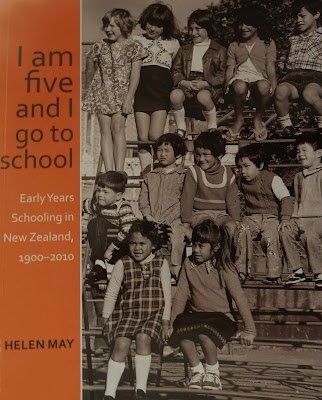 Since 'Tomorrows Schools' ( 1986) teachers would be excused if they thought all ideas about teaching and learning came from those distant from the classroom - and more recently imposed by technocrats and politicians.

This was not aways the case.

Progressive ideas that helped New Zealand lead the world in education, particularly in reading, were developed by creative early education teachers who were well aware of the modern educational ideas of the time.

The history of progressive education in New Zealand ( now at risk) is the subject of a new book, ' I am five and I go to school', written by Helen May.

The book follows the growth of educational ideas for both European and Maori  early education.

In particular the book celebrates the work of Infant Mistresses or Senior  Teachers Junior classes  My own experience has taught me that all the best idea have come from those who teach the very young children rather than with those working at the 'higher' levels  but this seems to have been forgotten. As children move up through the school system their experiences, their sense of agency and voice are replaced by subject requirements and teacher intentions. At the secondary little has changed in hundred years.

And to make the teachers efforts more impressive they were  working in a very standardised educational environment. It seems we are now forgetting their efforts as we move back to a new demeaning standardised teaching era.Once again we need courageous educationalists to  decide what is worth fighting for!

Practices we now take for granted were once seen as radical and the salutes such people as Sylvia Ashton Warner, Gwen Somerset, Myrle Simpson, Marie Clay, Elwyn Richardson and all those now forgotten infant mistresses. Central to more recent developments was the inspired leadership of Clarence Beeby the Director of education in the first Labour Government.

All their hard work  developing student centred learning is being replaced by a  'new right' agenda  based on measuring of student achievement in a narrow range of learning, the traditional 'Three Rs', an old idea  returning as National Standards.

The 2007 National Curriculum, which briefly provided a future orientated vision, and a reaffirmation of earlier ideas, has been replaced by the current governments  'new right' agenda with its potentially undermining simplistic requirements to return to grading students against imposed standards.  Worse still is the 'press' to push such uncreative ideas down to early education.

This is a book that provides a window into the history of schooling in New Zealand from the perspectives of  younger children and the enlightened educational ideas of their teachers who placed the importance of play and the placing of the needs and interests of their children central. Of particular interest was the power of Infant Mistress groups where junior teachers gathered to share ideas. It also introduces readers to educationalists such as Montessori, Susan Isaacs,and John Dewey. Those interested in the growth of Maori education will find much of interest.

Most of all it celebrates, now forgotten, the efforts of  creative junior and early education teachers whose work is now at risk.

Margaret Carr writes powerfully that is the dispositions children develop as they grow that are the really important things... 'They are dispositions for learning in school and adult life as well, and we need to look very carefully at any early childhood or school practice that might undermine them'.

Developing dispositions, positive learning identities and valuing student diversity, rather than measuring children against flawed standards, are the future challenges for teachers to focus on.

The book concludes with the what will be missing when an instrumental agenda, with it's vocabulary peppered with the language of business and management, is imposed.

What is wanted, Margaret Carr writes,  is  to: ... 'produce children who have a disposition to be learners,to take an interest, to become engaged, to take responsibility, to become good communicators, to become explorers - then we are setting a great foundation.It's going to take a brave teacher to really challenge National Standards, but if there is sufficient freedom and innovation, skillful teachers will make it happen, They always have'.

Creative teachers, as always,  will lead the charge. It won't be easy!
Posted by Bruce Hammonds at 11:53 am

Very few teachers today will appreciate the work done by junior teachers to the develop New Zealand language arts teaching approach in the 60s and 70s - this is a shame because the ideas they fought hard to establish are all but lost.

Learning, as your blog says, is about developing positive dispositions towards learning - literacy and numeracy ought to contribute towards this not replace them.

Thanks for your blog - thought provoking