The standards agenda :history repeating itself? 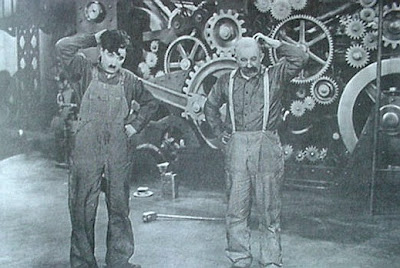 Charlie Chaplin was well aware of the dehumanizing effects of the industrialisation ( standardization) of society.


While tidying up and sorting out unwanted notes I came across one page of a five page article which made me stop and think.

The full article must have been about the need for greater democracy in education in the United States - a humanitarian approach that encouraged students to take a greater responsibility for their own learning and actions; I guess influenced by past writers such as educationalist John Dewey .

Such a student centred approach ( often now called personalisation of learning) was well established in New Zealand primary schools led by innovative teachers  and educators post world war two but is now at risk by the 'neo' standards approach favoured by the current government.

Now,as then, being a truly creative professional educator was a subversive business.

In the early years of the 20th century  those outside the school were determined to impose a 'scientific approach' to learning one based on efficiency and measurable progress against set standards. In a book of the time the need for unquestioned obedience' was stressed as the 'first rule of efficient service' for teachers.

New Zealand teachers are facing the same requirements as they are being forced to comply with the 'new' standards agenda.

In 1914  one commentator observed 'there were so many efficiency engineers in school houses in big cities that the teachers can hardly turn around in their rooms without butting into two or three of them'. No wonder obedience was prized by those in control of schools.

Many New Zealand teachers must have similar thoughts today!

In early days in New Zealand students were arranged in classes called standards and promoted only if the achieved required level of achievement. In more recent times the ideas of holding back students for an extra year in the infant classes was common - this was later shown to be of no benefit. In  early days inspectors checked schools to see that the standards were being taught . Naturally enough most teachers conformed and taught to the narrow tests that were being used; a process now in place today in countries with national testing regimes and with comparative league tables.

The article I found stated that 'during that decade, precisely a hundred years ago, nationally distributed tests of arithmetic, handwriting and English were put into use.Their results were used to compare students, teachers and schools; to report to the public; and even merit pay- a sort lived innovation due to the many problems it caused.'

Does any of this sound familiar?

The article continues, 'In the view of those brilliant managerial engineers, professionally trained teachers were considered troublesome , because they had their own ideas about education and frequently didn't go along meekly with the plan'.

The same applies now in New Zealand as creative schools resist complying to Ministry requirements. Unfortunately , as in the past, most go along meekly.

As one teacher wrote in 1912 : 'We have yielded to the arrogance of "big business men" and have accepted their criteria of efficiency at their own valuation without question.We have consented to measure the results of educational efforts in terms of price and product - the terms that prevail in the factory and department store. But education, since it deals with in the first place with human organisms , and the second place with individuals, is not analogous to a standardizable manufacturing process.Education must measure its efficiency not in terms of so many promotions per dollar of expenditure....it must measure its efficiency in terms of increased humanism, increased power to do, increased capacity to appreciate,'

Isn't that what New Zealand schools and creative teachers should stand up for now?

History needn't repeat itself. Standardisation is the wrong answer.

Not if we want to be a lead country in exciting unpredictable creative future.

Now read what Kelvin Smythe Phil Cullen think about the current direction of education in New Zealand
Posted by Bruce Hammonds at 10:31 am

It sure seems our governmnent looks back to the past for ideas and is equally influenced by a market ideology.